Strategy Snacks #1: Consider All Your Options

Welcome to the first edition of Strategy Snacks, a series of articles that offer bits of strategy in bite-sized pieces. My hope is that I can help you improve your game just a bit without getting bogged down in a morass of jargon and equations. I’ll also be talking about how and where I learned these things and pointing out players that illustrate the point.

In this edition of Strategy Snacks, I’m going to talk about considering all of your options. 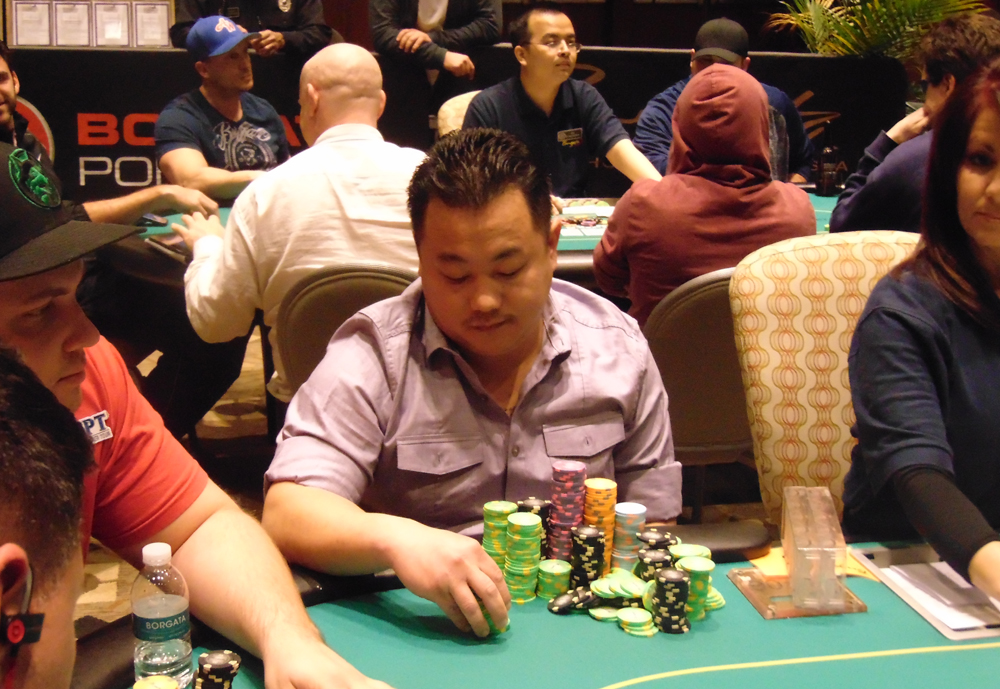 Somehow he always has a mountain of chips … (Image: Borgata Poker)

I picked up this skill from my pal Kou Vang, one of the best players, and humans, that I know. Talking poker with Kou has been invaluable to my tournament game, and his greatest skill is that he never gives it away. If you are in a pot with Kou, it will cost you some serious cash to steal it, and you won’t get any free showdowns or easy wins. Because Kou always considers every option. That’s why I call the river shove as a bluff, even when I have quite a bit of showdown equity, The Kou.

Most players will happily check behind. They missed their flush, but still have reasonable showdown value and will often win the pot. When the big blind checks the river, there is a feeling of relief. Now we know he doesn’t have a monster, and we don’t have to make a tough decision facing a bet. Is our hand good enough to value bet here?

Take a minute and think about how you would really play this hand if you were in this spot. And let’s assume your opponent isn’t particularly tricky and you know enough about them to be fairly certain they must have one pair or a busted draw. And let’s assume that both players have a little more than the pot in their stack. And that your opponent hasn’t played with you before or seen much from you so far today.

What’s the most profitable play?

That feeling of relief for the chance to get to a free showdown and not be facing a tough decision leads most players, even some who have been playing a long time and play fairly well, to check behind here. It can be almost automatic. But is it the best play? If we consider all of our options every time we have a decision to make, we often find ways to make more money while also avoiding the temptation to play on autopilot. In this case, we have a few reasonable options.

Going all-in is interesting though. Given our opponent’s range, can they ever call? I would say with typical players in smaller buy-in events, they will fold their entire one-pair range. Against some players, you just know they don’t have a king or they would have bet the river. So, your opponent may fold 100% of the time against an all-in.

In those cases — and this looks like it might be one — going all-in is the better play.

Now you can’t do this every time against every player. People will catch on and start checking monsters to you on the river every time. But, it’s also not badly unbalanced because you might also go all-in with a set of kings, especially if your opponents are used to seeing you shove without a big hand.

If you’re in a situation where your opponent is going to fold close to 100% of the time here, then shoving is a much better option than checking behind and hoping that you’re winning. Making this play takes two things — guts and the ability to consider all of your options. If you get too comfortable and take the easy play, you could be giving up a lot of money.

My goal isn’t to convince you to shove every river when your opponent checks to you; it’s to get you to consider every option in spots where you might have an automatic play that seems right. Winning 70% of the time by checking isn’t nearly as good as winning 100% of the time by shoving all-in. I don’t even need to run the math on that one.

And I can guarantee you, Kou isn’t giving you the free showdown in this spot unless he has a very good reason to. That’s why I think of him every time I’m in this spot, because I know he’s always the predator, always looking for the best option, ready to take the pot away if you show the slightest sign of weakness. And that’s the player I strive to be.

So think about it every time. Consider how your opponent will react to every play you could make with the range of hands you think they hold. And when you’re in a pot with a world-class player, remember that they’re doing the same thing.

That’s it for today’s Strategy Snack. That should hold you over until dinner.