Matt Stout, poker pro and founder of the popular Charity Series of Poker, revealed on Twitter last Friday that he tested positive for COVID-19 not long after playing Day 2 of the WPT Five Diamond World Poker Classic at the Bellagio. Word got around quickly, and Stout was praised on Twitter for making a point to let everyone know who may have been exposed. 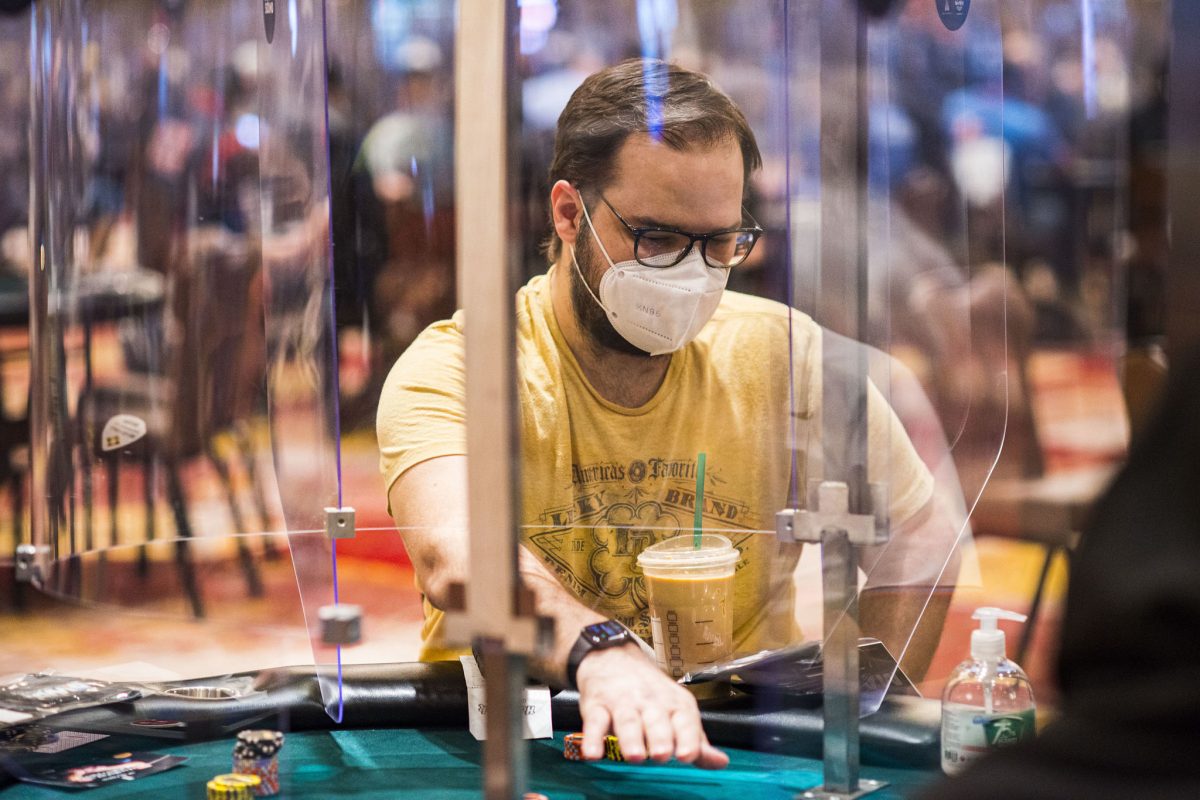 Matt Stout, seen here at the WPT Seminole Hard Rock in August, is vaccinated and has been diligent about wearing masks. But he still tested positive at the WSOP. (Image: WPT)

But what if this had happened after he busted out on day five and had played with everyone left in the tournament? What if he made the final table and busted out in 8th place after playing for a few hours?

Given the rate of spread of the disease, it’s very likely that at least one person at the table would be infected if a sick player was at their table for a significant period of time. And if the final table went on for another day, they might already be transmitting the virus to the others.

I just rapid tested positive for COVID & wanted to let everyone know for contact tracing purposes since I played @WPT @BellagioPoker. Didn’t feel any symptoms until late last night after busting & getting home, when I felt a scratchy throat. Thought it was a cold til the test. 🤒

What if it hadn’t been Stout, who I believe would have disqualified himself and admitted his positive test even at the final table? What if it had been a player who needed the money more, or cared about their fellow players less?

I ran a poll on Twitter during the World Series of Poker this year and the results weren’t encouraging. The vast majority of my followers believed that less than 25% of players would take a COVID test if they were feeling sick after bagging a 4x starting stack after Day 1.

What percentage of players in the WSoP this year would get a Covid test after bagging 4x starting stack, knowing it would disqualify them?

This idea came up multiple times at the WSOP, and I myself was in contact with both Nick Schulman and Vanessa Kade a day or two before they tested positive, though I never had any symptoms and my tests came back negative. If my Twitter poll is even close to accurate, then the number of people who did report infections would indicate that COVID was circulating heavily at the WSOP, and most people weren’t getting tested because they didn’t want to be disqualified.

What are the legal and ethical responsibilities of the venue when lives might be at stake? Could a player who contracted Covid at a venue sue if they believed that the venue didn’t do enough to protect them? Could a player sue another player for not revealing their Covid status and infecting them? And could a player sue if they took a test and were disqualified? I spoke with two lawyers who both believe that all three of these situations could have merit for a lawsuit.

What can be done?

Expecting good behavior from all poker players just isn’t realistic. And the current system only punishes those who are willing to take a test even knowing that they would be disqualified while letting those with less integrity or concern for their fellow man spread the disease with no repercussions.

But a few changes might help. Removing the punishment for a positive COVID test would be a good start. The players in the $250,000 High Roller event at the WSOP  this year agreed to return the buy-in to any player who tested positive and was disqualified, an idea that some thought should have been implemented by the WSOP at every event.

Allen Kessler weighed in on Stout’s tweet, demanding that the WPT trace his contacts and notify them, but so far his tweet has received no response from the WPT or The Bellagio

Either way, I would insist that @BellagioPoker and @savagepoker trace back who was at your tables and notify those players. https://t.co/VedbNOrpyq

Requiring testing has also been discussed, though with large events, the logistics would be tough.

The very least that venues and tours can do is to make sure they get the word out when a player tests positive, offer free tests to anyone who is feeling rough, and return the buy-ins of players who do test positive. There is a very real chance that this kind of policy could save lives, especially given the increased transmissibility of the Omicron variant, which has now been spotted here in Nevada and is likely to be the dominant variant within a few months.

In Stout’s case, neither the venue nor the tour chose to even retweet his announcement. And the WSOP took a similar line this year, with no instances I could find of the WSOP retweeting a player’s announcement of a positive COVID test, including Schulman’s announcement after he had been in direct contact with many players and the entire broadcast crew.

Stout is recuperating at home and feeling a bit better as of the writing of this article. The infection came even after two doses of Pfizer vaccine, but no booster shot and no previous COVID infection. He’s been in contact with a number of people he played with recently, and none of them have developed symptoms or tested positive.

Oh my god, are they not tested before they enter the tourney and the casino at all?

We need to be vaccinated 2 times and tested as well to go even in a little restaurant here…
Only people with a booster can go at this time inside of restaurants, pubs, casinos etc. if not tested additionally to two shots.

If your poll was something like “would you get a Covid test”, then maybe you would have something resembling a coherent inference. Your poll has no relevance to the conclusions you try to make. Your polls relevance is only to do with what people think other people would do. In other words, your poll was worthless..