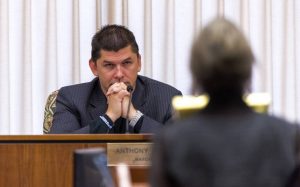 Stockton Mayor Anthony Silva went into defense mode amid accusations he videotaped a strip poker game involving a minor at a summer camp he hosted. Silva denied the charges but Stockton police want him to resign immediately. He faces up to three years in prison.

But before he surrenders his freedom, the California mayor won’t go down without a fight. Speaking to reporters, along with his attorney, Silva denied any wrongdoing.

“First of all, everyone there was 18 years old,” he said.  “I’m innocent and I appreciate your patience.”

Silva is accused of having videotaped a game of strip poker that included a 16-year old and some counselors at his summer camp for underprivileged youth in August 2015. He is also said to have supplied minors with alcohol.

Felony charges have been filed against him for recording confidential information without consent, along with misdemeanor charges of contributing to the delinquency of a minor. The investigation began in September 2015, but no charges were filed until late last week.

The gun used to commit the crime has been linked to Silva. He isn’t accused of the murder, but a gun stolen from his house was used in the murder, according to the San Joaquin County District Attorney’s office.

Silva failed to report the gun was missing until 27 days after the shooting. He claims his unoccupied house was robbed. The mayor who claims to have a “passion for helping youth” expressed sadness for Harris’ death.

“Words cannot describe my sorrow and heartbreak for the victim and his family. I feel terrible, and I feel sick to my stomach,” he told the Associated Press. “I only can react to what the news is claiming. Everyone please pray for Stockton.”

Silva is up for re-election but, with these two negative stories, he may find that to be a daunting task.

The mayor stuck to his guns (no pun intended) at a recent press conference, explaining to the media his side of the story. A side that differs from what prosecutors have said.

“No. 1, everyone there was 18 years old,” he stated, in regards to the summer camp party which took place inside his cabin.

“No. 2, I never, ever, ever, ever endangered a child. . . ever. No. 3, I never provided alcohol to anyone, and I certainly did not secretly record anyone.”

The FBI told a different story last week at the time of his arrest. A 19-page affidavit shows there’s two sides to every story.

“Mayor Silva allowed and encouraged persons under 21 years of age (including a 16-year-old) to consume alcohol for the purpose of getting intoxicated so he . . . could involve, and participate with, such persons in sexually suggestive behavior such as strip poker,” the affidavit stated.

The mayor will appear in court again on August 18. He was released on bond the same day he was arrested.