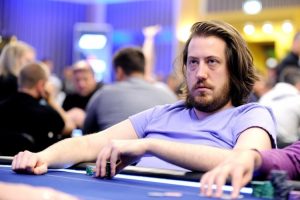 Steve O’Dwyer can finally get some rest, with almost $2 million from his PCA Super High Roller win. (Image: highstakesdb.com)

The three-day tournament saw O’Dwyer beat out a record-setting 66 entrants, and it’s not his first rodeo, either: the poker pro also snapped first in November’s Hong Kong Super High Roller APPT event for $1,811,638, and has over $9 million in total live earnings, according to his Hendon Mob profile.

O’Dwyer snapped the top prize from the jaws of previous chip leader Roger Sippl, who took second for a nice consolation prize of $1,344,420. Rounding out the final table were several top-name pros, with Bryn Kenney taking home $873,880 for third; Sorel Mizzi sweeping fourth for $659,400; Christoph Vogelsang in fifth for $512,160; and Sam Greenwood sixth for $396,920.

The 12th annual PokerStars Caribbean Adventure (PCA) Main Event kicked off on Thursday, as the $10,300 No Limit Hold’em tournament began at the Atlantis Resort in the Bahamas.

The PCA commences a new year of poker, often attracting the biggest names from around the world. The nine-day festival consists of 28 events, and while it officially started with the thrilling $100,000 Super High Roller on Tuesday, it’s the marque attraction, the Main Event, when things get properly under way.

Through satellite tournaments, PokerStars qualifiers, and of course, cash entries, all participants began with 30,000 chips. Typically the slower of the two first days as far as entries are concerned, Day 1A drew 220 players to the tournament room, with 139 surviving. Although today (Day 1B) will see more competitors take their seats, yesterday’s action was fast-paced, intense, and overflowing with household names.

Many of the game’s most experienced and well-known professionals wasted no time in beginning their 2015 season, opting to start the Main Event on 1A.

Daniel Colman: Last year’s most dominating figure who hauled in more than $22 million and swept three Player of the Year awards, Colman was seated at the same table as someone who also found success in 2014, PCA Main Event defending champ Dominik Panka.

The duo seemed friendly during early hands as both built up chips. Colman finished the session with 40,500, while Panka ended with 42,200.

Vanessa Selbst: The world’s most successful female player of all time is no stranger to Paradise Island.

Ole Schemion: Currently ranked first on the Global Poker Index, the German superstar got off to a slow start before gaining momentum, finishing a strong day with 74,300.

As always, plenty of excitement took place during the opening session of the PokerStars Caribbean Main Event. The most shocking headline came from Keven “Stammdogg” Stammen. A pro many are keeping an eye on in 2015, Keven was the second player in the entire tournament to bust. As he exited the table Stammen joked, “Can we reenter?”

Another shocking development came from Argentinian player Juan Etcheverry, whose day was largely a one and done.

Etcheverry put 15,000 chips on the board following a suited 9-A-K of hearts flop and J of clubs turn. His opponent called, and Etcheverry’s A-Q off-suit won the pot when the river revealed a Q of spades.

Later in the day, Juan did return for a few additional hands, increasing his stack to 65,100.

We’ll continue to follow the action and will bring you more updates on the PCA Main Event.