Stephen Chidwick is to the US Poker Open what the New England Patriots are to the NFL Playoffs. The high roller crusher shipped Event #6, $25,000 Pot Limit Omaha for $351,000, his second title of the series and fourth in two years. 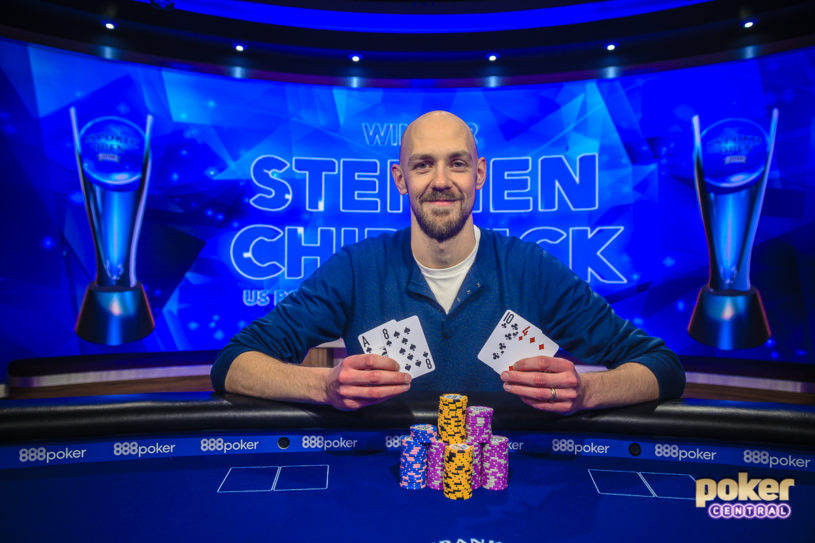 Stephen Chidwick is an unstoppable force at the US Poker Open. (Image: Poker Central)

There has been 14 completed US Poker Events in history. Chidwick has won 29 percent of them. And he’s also cashed in five other events.

This year, he holds the overall series points lead but despite two titles and two additional cashes, he’s certainly no lock to defend his US Poker Open crown. A few other players, including Sean Winter, are still in contention with four events to complete.

Will the Heater Ever End?

Chidwick’s run in USPO events is no fluke. On Tuesday, he surpassed the $20 million mark for his career. He’s been one of the most consistent high rollers in the world the past few years and has cashed for over $1 million every year since 2012.

Katz also gave Chidwick a run for his money heads-up. The high-stakes players were entrenched in a lengthy battle but it was the now four-time champion coming out victorious in the end.

Through six events, Chidwick holds the player of the series lead with 540 points. Right on his heels is Sean Winter, who also has four cashes in the series, with 440 points. All Winter needs is a third place finish – worth 100 points – to even the score.

Katz, with two runner-up finishes and a fifth place cash, isn’t far off the pace. He is 200 points behind Chidwick, which means one title or a combination of two deep runs and he’s right back in it.

With none top 10 point earners having made the final table of Event #7, which takes place at 3 pm PT on PokerGo, and no other player within 200 points of the lead, it’s hard to imagine anyone other than the three players above will be crowned US Poker Open champion. Time is running out for others to catch up.

I see nothing more than one more poker legend growing. Will he reach Justin Bonomo?

I will cheer for your game !!

tremendous result. I think this guy was incredibly lucky. although I do not doubt his skill. not everyone manages to take such prizes so many times. Greetings!