The 2018 Lucky Hearts Poker Open festival is taking place right now at the Seminole Hard Rock Hotel & Casino in Hollywood Florida. On Thursday night, the biggest buy-in tournament of the series, Event #12: $50,000 Super High Roller, wrapped up, and the title came down to a battle between two poker heavyweights. 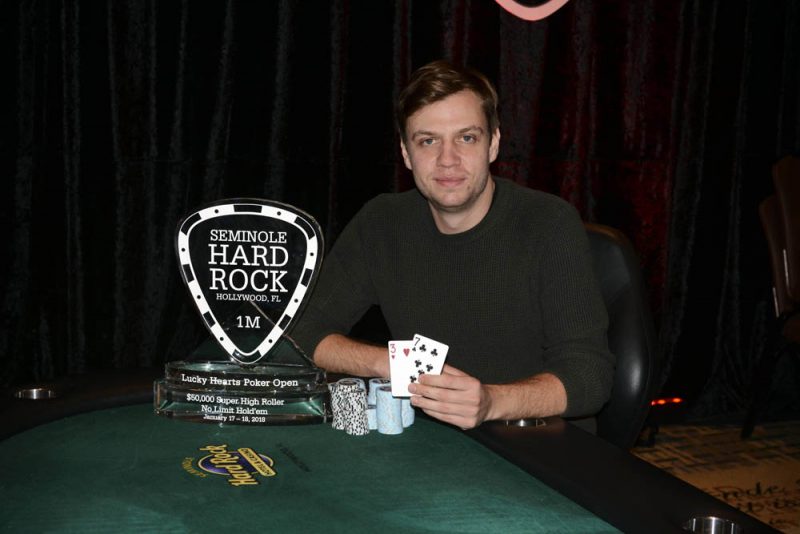 Eventually, Mateos, the youngest player in history to win three World Series of Poker bracelets, made it to heads-up play with a lead over Germany’s Stefan Schillhabel. Over the next two hours, the chip lead exchanged hands several times.

Mateos answered with a check-raise to 200,000. Schillhabel called, and the dealer burned and turned the 10♥. Mateos jammed for 565,000 and Schillhabel called with his two pair. A 6♦ river was no help. Mateos had to settle for second place and a $308,125 consolation prize.

“Pretty tough field. Like only two recreational players, and the rest were pros,” Schillhabel told tournament officials after the win. “The re-entries came mostly from the better players … And that final table I think was the toughest final table I’ve ever played.”

“Against these guys, it’s hard to exploit them,” Schillhabel said. “So, you just have to play your best game and not be exploited yourself.”

The Lucky Hearts Poker Open win marked the fifth-largest score of Schiillhabel’s career, bringing his lifetime tournament earnings to $8,632,702. That allowed him to leapfrog Koray Aldemir on Germany’s all-time money list and move him into 10th place.

Sitting ahead of him are 2011 World Series of Poker Main Event champ Pius Heinz and 2014 PCA Super High Roller winner Fabian Quoss, who have $9,028,569 and $9,659,596 in earnings respectively. Both have been MIA from the poker world, so there’s a good chance Schillhabel moves up the list this year.

The WPT Lucky Hearts Poker Open Main Event begins this weekend and runs through January 24. Be sure to check back next week for a recap of the action.

that’s how bad cards bring first place and profit. What strategy he uses is not known.

Since i know Adrian Mateos, not much, i know him since a read a new from CC, and comment that he should be sponsered better but, i saw him playing the last 2 tournaments, PCA and this Super high, i liked that way he plays and got 4th now he finished 2nd, that is really good. Stefan got his table and mateos got the trap card, i called that way cause it is a trap,
trap card= a card that gives you top pair but you are behind the hand
I don’t know if it is a real name for it,
Anyway there is nothing much to do to call and let the luck play a little. Great High Rvoller