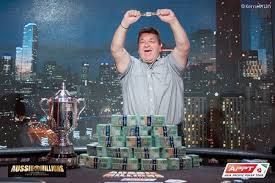 Stavropoulos, a popular player at the Crown Casino in Melbourne, defeated Germany’s Lennart Uphoff heads-up to take home AU$1,385,500 (US$1.08 million), while just across the river to the east, Andy Murray and Novak Djokovic did battle in the final of the Australian Open tennis.

However the Championship will also remembered for Phil Ivey winning his third Aussie Millions Super High Roller event in four years, and for Richard Yong’s first-place finish in the $100,000 Challenge.

Yong shrugged off the pressure of his recent brush with the American penal system to defeat Ole Schemion heads-up in the AU$100,000 (US$78,241) buy-in event.

The Malaysian businessman and high stakes player was one of nine people arrested in June after the FBI uncovered a multi-million-dollar World Cup betting ring operating out of several luxury villas at Caesars Palace.

Yong and Ivey Recoup Some Losses

Yong could potentially have been sentenced to five years in prison, but he struck a plea deal and instead received probation.

He was also fined $100k and an ordered to forfeit $400k in cash and property, although the AU$1.8 million (US$1.4 million) he won here will no doubt take the sting out of that particular judgment.

His fellow countrymen Paul Phua and son Darren have plead not guilty and are currently awaiting trial.

Ivey, meanwhile, was in fine form as he bested and busted a final table that included Eric Seidel, Scott Seiver, and Doug Polk, eventually defeating Mike “Timex” McDonald heads up.

In defending his title, Ivey took home AU$2.2 million (US$1.72 million), which may take the sting out of the fact that he spent quite a lot of money posting bail for his friend Richard Yong last June.

But the biggest cheer of the night went to the hometown hero, Stavropoulos.

The Melbourne native faced a 2:1 chip deficit when he entered the heads-up stage against Uphoff, but clawed his way back into contention.

And, the moment of truth, when it came, was a bit of cooler, with Stavropoulos trumping his opponent’s 10-high straight with his J-10.

“Obviously it’s the home turf tournament, it’s a big tournament. It’s great to win, but I don’t know if I’ll be recognized tomorrow any more than I am today,” he suggested modestly. “I might by a house tomorrow,” he added.

Fantastic job Mr. Ivey, and good on ya mate to the hometown hero!

I think it’s the most courageous

I don’t think the average US poker fan would recognize aussie millions main event winner Manny Stavropoulos. I wish they would show some footage over here !