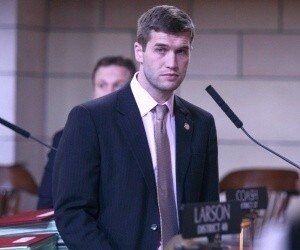 Nebraska State Senator Tyson Larson, who seeks to legalize draw poker and hold’em in Nebraska by having them reclassified as a game of skill. (Image: kvnonews.com)

A Nebraska poker bill that seeks to legalize the game by declaring it a game of skill will be introduced to the state legislature this week by State Senator Tyson Larson.

Nebraska’s Constitution currently prohibits games of chance in the Cornhusker state, but Senator Larson proposes to sidestep this issue by having certain poker variants legally defined as games of skill.

Under proposed the legislation, draw poker and hold’em, although, curiously enough for a Nebraska poker bill, not Omaha, would be legalized in bars and clubs.

“You can be a professional poker player; you cannot be a professional coin flipper,” Larson told the Lincoln Journal Star. “You can lose a poker game on purpose; you can’t lose a coin flip on purpose. You can have the worst hand in poker but be the best player. The math is there; the statistics are there,” he said. “Poker is a game of skill; it is not a game of chance.”

Should the bill prove successful, bars would be granted a license to host poker games after paying for a special endorsement on their liquor licenses and the house would take a fee of 5 percent on cash games and tournaments.

Non-profit organizations would also be permitted to apply for temporary licenses.

Meanwhile, said Larson, 49 percent of the funds raised from poker license fees would go to local governments, 50 percent to help enable property tax relief, and the remaining one percent would go into a fund to help compulsive gamblers.

His other bills introduced so far at this legislative session include a push to allow bars to stay open 24/7, establishing an exemption to the smoking ban for cigar bars and eliminating the five-minute break between keno games.

However, there is a legal precedent that adds weight to Larson’s bill.

Kind of. In 2012 a judge in New York ruled that poker was a more a game of skill than a game of chance, as he dismissed the case against Lawrence DiCristina.

DiChristina had been arrested for running poker games in the back of a warehouse on Staten Island. “The most skillful professionals earn the same celestial salaries as professional ballplayers,” declared the judge.

The ruling was later overturned in a federal court.

A hearing on Larson’s poker bill is yet to be scheduled.