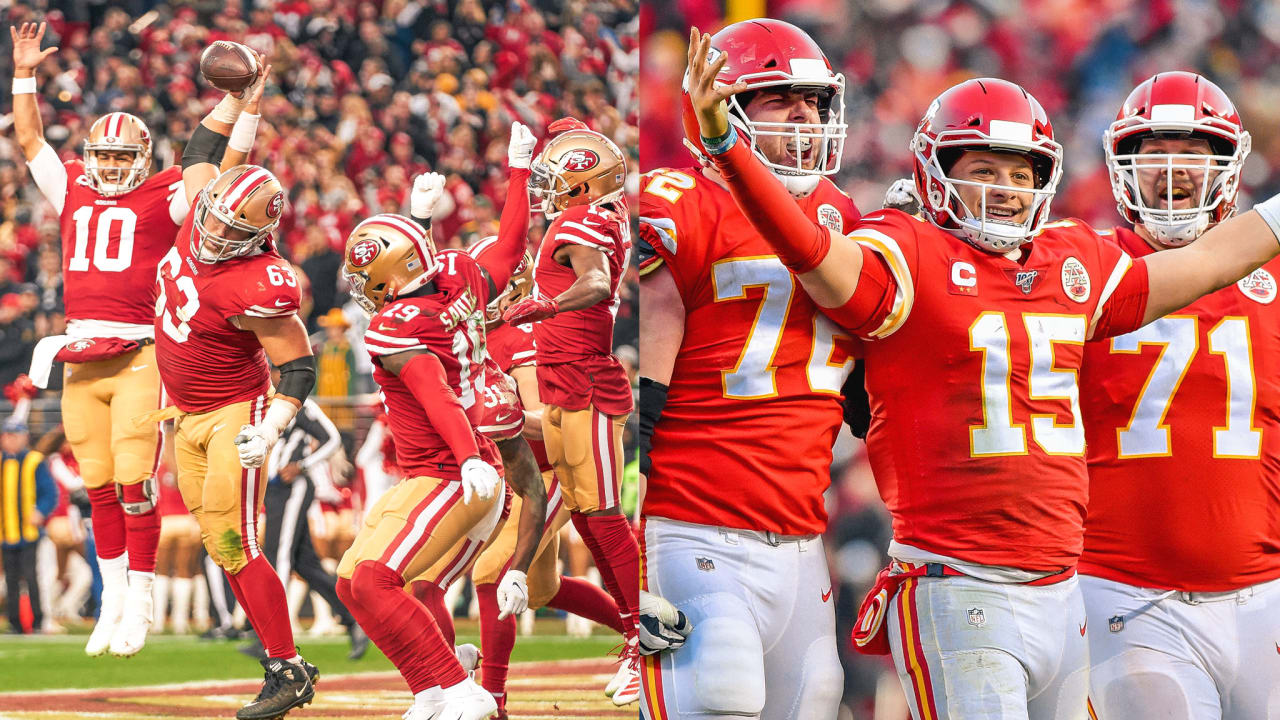 Sports betting fans are jumping all over the 49ers (left) to win the Super Bowl, but the Chiefs (right) look to be equal in the talent department, according to Las Vegas sports betting expert Amal Shah. (Image: 49ers.com)

I spoke with Shah, a poker enthusiast who plays cash games in Las Vegas, by phone to get his take on the big game. Kansas City opened as a slim 1.5-point favorite and that spread hasn’t jumped much at any sportsbook. In most years, the Super Bowl line fluctuates throughout the two week layoff.

Shah believes, “these are the two best teams in the NFL.” Unlike in some years where one team in the Super Bowl has a significant talent edge, these teams appear, at least on paper, to be evenly matched. But they aren’t identical squads, Shah said.

“The money has been heavy on San Francisco because they have the better defense. Smart bettors tend to lean towards defense instead of offense.”

Can Patrick Mahomes Be Stopped?

The sports betting expert knows Kansas City has an X-factor on it’s squad that could offset the defensive gap.

“Patrick Mahomes is the best player in the NFL. He throws maybe the best deep ball I’ve seen in a long time,” Shah said.

Mahomes, the 2018 NFL MVP, has transformed the Chiefs from a solid, competitive franchise into a championship contender. He’s the type of quarterback this organization has lacked for so many years, and a big part of the reason Kansas City is finally playing in its first Super Bowl in 50 years.

The Chiefs, for a change, have a leader who can make big plays with his feet and his arm. Shah believes Mahomes will be the best player on the field, and could be the difference maker, even against a tough San Francisco defense. 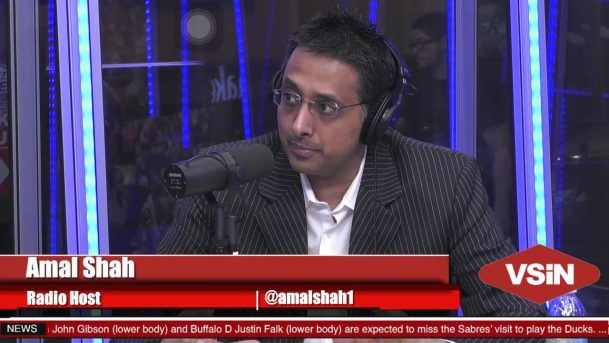 Poker enthusiast Amal Shah helps sports betting fans break down the wagers for his “My Guys in the Desert” show on VSiN, the Vegas Sports Information Network. (Image: Twitter)

Shah isn’t as impressed with 49ers quarterback Jimmy Garoppolo. In fact, he referred to the former Tom Brady backup as “overrated.”

Garoppolo helped lead the 49ers to a 13-3 regular season record, passing for 3,978 yards with just under 70-percent completion. But he hasn’t been asked to do much in the playoffs. He’s thrown just 27 passes in two playoff games while San Francisco has, instead, leaned on its running game.

If Sunday’s game is close in the late going, Shah has more confidence in Mahomes making plays.

I asked Shah if the 54.5 over/under might be high due to the 49ers’ insistence on running the football so frequently in the playoffs.

That makes perfect sense. San Francisco is likely to play a ball-control style offense, and run the clock to keep Mahomes and the Chiefs offense off the field as much as possible. If they’re successful, hitting the over won’t be easy.

Conversely, if the Chiefs are to win this game, they’re likely going to put up some points. Andy Reid’s offensive philosophy isn’t to grind it out on the ground and rely on the defense. Kansas City is going to put the ball in the air.

“I could see Mahomes completing something like 24 of 32 passes for 300 or more yards and having a historic Super Bowl performance,” Shah predicts.

But he also believes the 49ers have a great shot at winning this game. Shah complimented San Francisco’s running game, defense, and he has a ton of respect for former Iowa Hawkeye tight end George Kittle, who many argue is the best at his position in the NFL.

Shah, originally from Texas, is an avid sports bettor in Las Vegas. The company he works for, VSiN.com, recently reported that Nevada sportsbooks set a record for revenue in 2019, despite expanded sports betting in other parts of the US.

Last year, the Silver State sportsbooks took in $5.3 billion in wagers, generating $329 million in profits — both records. That’s a 9.52 percent spike compared to the amount won by the casinos in 2018. Some projected that Las Vegas — and Nevada in general — would take a hit due to the added competition. Shah wouldn’t be surprised if that eventually happens, but he’s still optimistic about Las Vegas’ immediate future.

“I think it will be a while before it hurts Vegas,” he anticipates. “I do think you’ll eventually see a bit of revenue drop-off, but we’re years away.”

Sports betting was legalized at the federal level in 2018 following a Supreme Court ruling. That paved the way for individual states to determine legality. Thus far, 13 states have licensed sportsbooks in operation, and more will soon follow suit.

Las Vegas remains the top sports betting destination in the world, however. If you’re heading to Sin City to get some action on the Super Bowl, Shah has some advice.

“I’d stay away from the Strip,” he advises. “It’s so densely populated on Super Bowl Sunday. Where you watch the game really depends on what you’re looking for and how much you want to spend. The Westgate is very popular although it will be packed. The Palazzo is great. LaGasse Stadium is good, but it’s expensive.”

Shah is a contributor on the show My Guys in the Desert, which you can listen to on VSiN.com. You can catch the show online or, live and in person, at the South Point in Las Vegas from 2-4 pm. To celebrate the Super Bowl, VSiN will host a free weekend preview on its website beginning Saturday at 12 noon PT.

If you’re planning on betting on the big game, they offer some great advice. Best of all, the GOAT of college football broadcasting — Brent Musburger — is the face of the website.

Musburger is hosting “Betting and Beers” — a free sports betting seminar with tips on betting on the Super Bowl — at 4 pm PT Saturday at the South Point.