In Spain, Man Fakes His Own Kidnapping to Pay Off Poker Debts at Local Club 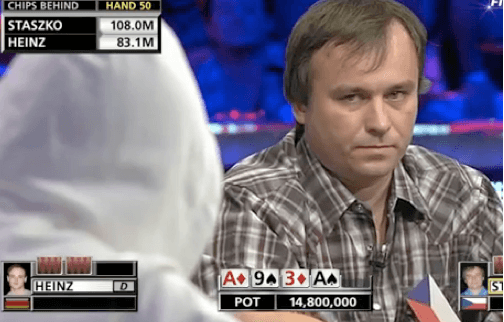 While Martin Staszko nearly dealt with a very real kidnapping situation after his WSOP run, a recent story in Spain turned out to be fraudulent. (Image: readingpokertells.com)

Ever felt that sense of panic when you can’t make your payments? Why not fake your own kidnapping?

That’s what one man in Spain thought would be a great idea, but like so many light bulb moments, this one quickly went dim.

Everyone handles their gambling debts in different ways. Some people pay them off right away, others have been known to disappear so they never have to pay them back, and a few people might even work out payment plans to avoid getting their thumbs broken.

But one Spanish man came up with a rather unique way to get the money to pay off the money he owed to a poker club. The unnamed gentleman concocted a fake kidnapping plot with the express intent to extort money out of his own parents, money that would settle his poker and drug debts that he couldn’t pay off himself.

The caper began late last week, when his father reported the man as missing to a local branch of the National Police in Cartagena, a city in southeastern Spain. He said that he and his wife had been contacted by kidnappers who had threatened to kill his son or “chop off his legs” unless they agreed to pay a ransom.

Even at this time, some aspects of the case sounded suspicious to the family and police. The alleged kidnappers seemed to know a lot of details about the family’s finances, according to a report in Spanish newspaper La Informacion. When the parents were given a chance to talk to their son, he begged them to pay the money and confirmed that he believed he would be killed if they didn’t comply.

Given the claims, the police took the situation seriously, and even brought a police negotiator in to handle future talks with the kidnappers. However, once the police got involved, the individual who had supposedly been kidnapped turned up back at his family’s home in healthy condition, saying he was “safe and well.”

It didn’t take much more investigation for police to become highly suspicious about the situation. It soon turned out that the “kidnapper” was the owner of a local poker hall where the man had reportedly built up extensive poker and drug debts.

Police next turned their attention to the “victim” in the crime. Under questioning, the man eventually confessed to orchestrating the entire stunt as an attempt to get money out of his parents in order to cover his debts.

Both the would-be victim and the poker hall owner have been arrested, and both are awaiting charges.

Reports have noted that this is not the first fake kidnapping this year in Cartagena. In June, a 28-year-old woman was arrested after faking a kidnapping in an attempt to extort money from her partner.

Not all examples of poker kidnappings are quite this fraudulent, however.

In 2013, a Florida resident named Michael Melillo was sentenced to more than 24 years in federal prison after he planned to kidnap a wealthy businessman with a plan to collect on a $20 million ransom. Melillo hatched the plot after losing hundreds of thousands of dollars in poker games that he believed may have been rigged.

Just last year, it became known that 2011 World Series of Poker Main Event Martin Staszko had been targeted by kidnappers. Staszko himself didn’t learn about the plot until years later: the kidnappers had invited him to a poker game that he declined to attend, and it later turned out that the group had kidnapped and extorted other wealthy individuals before being caught by Czech police.

I don’t think self kidnapping is the correct way to raise/build a bankroll !

Before fake a kidnapping, register here to cardschat and read some strategy article.
One article teach you how to start with a baby bankroll…
When you make the choice to do drug and play poker you does not have the right to blame other for that, blame yourself…