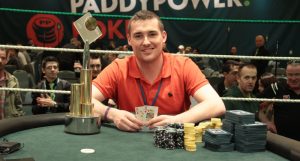 Patrick Clarke: As a Sole Survivor, he wins an extra €500k on top of his €200k first prize in the Irish Open. (Image: paddypowerpoker.com)

With all the excitement of the EPT San Remo, where Victoria Coren Mitchell made history by becoming the tour’s first-ever two-time winner, we almost forgot about our traditional poker preoccupation over the Easter Weekend, The Irish Open. Shame on us!

The Irish Open is the oldest, most venerable – and probably the most fun – poker tournament in Europe, a heady mix of gambling, Guinness and garrulous camaraderie that has been an unmissable Easter stop on the European circuit since its inception 1980.  And to those who opted for the delightfully clement climes of San Remo over a drizzly weekend in Dublin – well, your heart’s just not in it anymore – clearly.

Over the years the tournament has seen some great champions – Noel Furlong, Liam Flood, Joe Beevers, Marty Smyth, Neil Channing and James Mitchell, to name but a few – and now we have another, Patrick Clarke. Clarke, from Louth, charged through a field of 411 players to earn €250,000 ($345,145) and the most prestigious title Irish poker has to offer.

“Charge” is the operative word. Clarke got off to an explosive start on the final table, which was encased, for the occasion, within a specially constructed boxing ring. He took the chip lead when he eliminated Antoine Smits in ninth place, with Q-Q over 10-10, and soon took another scalp when he busted the last Englishman standing, Jonathan Lundy, when Lundy ran A-K into Clarke´s A-A.

Now steamrolling the table, he cracked Barry Donovan’s kings with a flopped set of tens, before dispatching a short-stacked Michael Gilligan in sixth. In fact, by the time play got to three-handed, Clarke had knocked out five of six players.

Somehow, though, by dinner break Liam Chevalier had managed to claw himself into the chiplead, but it wouldn’t last long. Clarke got back to business and eventually eliminated Chevalier, taking an 8.37 million to 3.74 million chip advantage into a heads-up battle versus Dave Pollock.

The fact that both players heads-up were “Sole Survivors” in the competition provided an interesting new dynamic. Players that qualified for the Irish Open via a paddypowerpoker.com satellite were automatically entered for the Sole Survivor promotion, whereby the last standing Sole Survivor would take home an extra €500,000 ($690,288) package of cash and tournament buy-ins. Paddypowerpoker.com has been running this excellent promotion for a number of years, but this was the first time that two Sole Survivors had clashed for the title.

It wouldn’t last long, though. Just a few hands into heads-up play, the two players entered into a raising war, with Clarke holding top pair to Pollock’s middle pair. Clarke made a good call with his top pair, considering the pressure, but good calls under pressure win poker tournaments, and this particular call won one of the biggest tournaments Europe has to offer.

“It means the world to win this event. It’s a dream to win this event. I can’t believe it. It hasn’t sunk in yet,” gushed the new champ. “I’ve been playing for a while but I haven’t had a big, massive score like this before, so this will maybe put me on the map a wee bit more. I felt it was coming for a long time, a lot of people had said before to me that it was going to happen, so I’m just glad it did on the big stage here.”