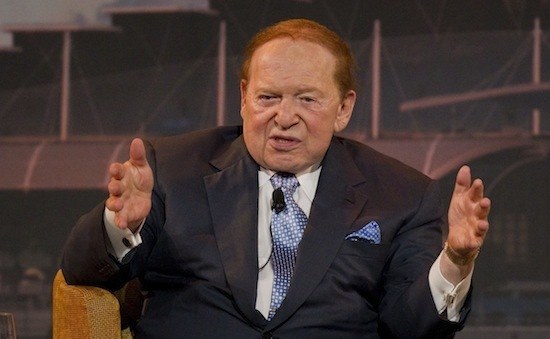 A Sheldon Adelson undercover video expose made by a US poker player in the Sands CEO’s Venetian and Palazzo casinos in Las Vegas shows that security and the potential for underage play may be more of an issue on land than online.

The expose by Tim James is particularly accusatory in that Adelson’s primary argument for banning online poker and gaming in general has always been the potential for underage gamblers to sneak online.

James decided to turn the tables on the billionaire casino owner after seeing him wax on in interviews about the likelihood of security breaches on the Internet.

Asserting that online poker should be outlawed completely, Adelson believes that online operators aren’t able to control who has access to their sites and, therefore, to real money gambling.

Claiming this makes the industry a danger to the youth of America, the gaming operator has been on a multi-year campaign to ban online gaming. He has famously vowed, in the past, to spend “whatever it takes” to see the US rid of the perceived evil once and for all, a possibility that is probably unlikely with three American states already fully operational as legal and regulated for online gambling, and several more on the cusp.

Earlier this week James uploaded a preview to his investigative video and early on Friday that first part of the full exposé went live.

Featuring one male and one female, both under the age of 21, the video shows both undercover agents buying drinks, gambling, and even picking up a prostitute inside the Venetian Las Vegas. (Of course, for anyone who’s ever been to Sin City, hookers in casinos are about as common as people with cameras on the Strip, but that’s another story for another day).

The Sands Casino in Bethlehem, Pennsylvania has been fined numerous times for allowing underage patrons entry to its property.

Since going live, the video has received a wealth of support from the poker community, including the Poker Players Alliance. As of our writing, the nine-minute video, shown below, had been viewed more than 37,000 in a week.

So sick of these demons marching out ethics in order to defend their own greed and hatred of humanity.

I would guess you could find similar activities on occasion in most casinos , but Adelson’s hypocrisy is pretty stunning .