Is Sheldon Adelson Bluffing or Will He Block Oakland Raiders Move to Las Vegas? 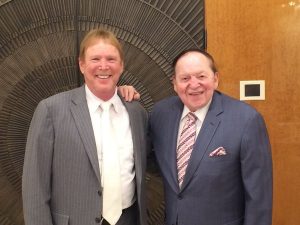 Sheldon Adelson could use his wealthy superpowers to block the Oakland Raiders move to Las Vegas. (Image: AP )

Sheldon Adelson doesn’t have a high popularity rating among poker players thanks to his anti-online gambling crusade.

And now he’s one stubborn decision away from angering Las Vegas residents.

The CEO of the company that owns Las Vegas’ luxurious Venetian Hotel and Casino could hold the keys to the NFL’s Oakland Raiders moving to Sin City.

If he doesn’t get what he wants, Adelson suggests he’ll block the move.

The Raiders remain in Oakland for the time being but owner Mark Davis has, for the past year, complained that the city is refusing to give his team a new stadium.

That deal appears to have no chance of happening so a move in the near future is likely.

In 2015, talk of the team moving to Los Angeles, its former home, sputtered when a stadium deal couldn’t be reached.

After flirting with a move to the City of Angels, Davis shifted his focus to Las Vegas, a place that has never hosted a major professional sports team.

Enter online poker’s biggest nemesis Sheldon Adelson to propose a stadium deal that would get the team to Las Vegas by 2019.

Where the Money is Coming From

The city recently reached an agreement to raise hotel taxes to come up with $750 million to help fund the new stadium. Las Vegas Sands, Adelson’s company, has pledged $650 million to the project, and the Raiders will chip in $500 million if the deal goes through.

No city has ever given so much to the construction of an arena. The deal between Adelson and Clark County would allow the billionaire to keep all profits his company receives from the Raiders.

Adelson believes bringing an NFL team to town will add more tourism and money for the city, so he doesn’t feel he should give back a portion of the profits.

Despite all that, Adelson isn’t satisfied. He wants the city to chip in more money and is threatening to back out of the deal if he doesn’t get what he wants. If he backs out, it’s unlikely the Raiders will move to Las Vegas.

“They want so much,” Adelson said. “So I told my people, ‘Tell them I could live with the deal, I could live without the deal. Here’s the way it’s gonna go down. If they don’t want it, bye-bye.”

Does He Want Full Ownership?

There is also a rumor swirling around the NFL that Adelson eventually wants full control of the Raiders as well. But Bleacher Report’s Jason Cole claims the rumors are untrue.

It will come as no surprise to poker players that Adelson is coming off as greedy. After all, we’re talking about a casino mogul who doesn’t want people to gamble online because he feels it’s harmful to his business.

Daniel,
I find it amazing that after all this time I still am reading articles alleging that Sands Corporation is helping to fund the proposed stadium. It is not. This is a personal investment to be made by the Adelson family.
As for online gambling, Mr. Adelson has repeatedly stated his reasons for opposing online gambling, and he has said his motivation has nothing to do with competition to his casinos. The fact is that there is very little if any overlap between the two customer bases. You may of course choose to disbelieve him, but you should not publish that opinion as fact. Thanks,
Paul

Hey, really nice Paul Werner walks all over this article clarifying, it is not Sands Corp, but Sheldon’s financial investment being offered. Then goes on to say why Adelsonmis against online gambling. Because they are two client bases, give me a break.

What is strikingly blaring about Paul’s comments was a no mention to the Sheldon Anderson may want the whole control of the Raiders organization instead of a part of the Raiders comment. Which in turn would be the reason that Anderson could live with the city’s deal or live without it. Thanks Paul for the insight.