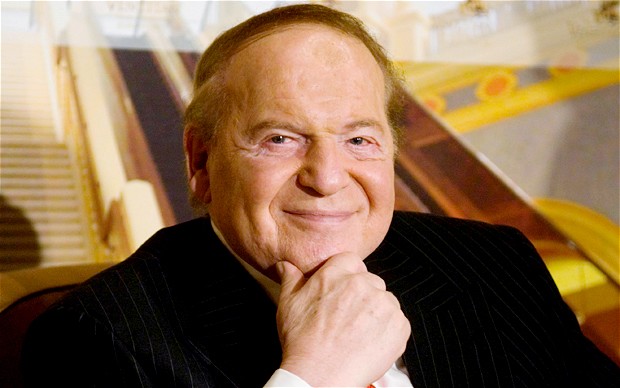 LVS Chairman Sheldon Adelson is still well-ranked in the latest Forbes Richest list for 2016 , although his wealth has fluctuated with Macau’s fortunes over the last few years. (Image: Bloomberg)

Casino mogul Sheldon Adelson has been ranked as the 22nd wealthiest person in the world in the annual Forbes Billionaires 2016 list this week. According to the website, the Las Vegas Sands (LVS) chairman has a net worth of $27 billion, give or take a few bucks.

This is not great news for those of us who believe in the right of ordinary Americans to play online poker in the privacy of their own homes.

Adelson has previously said he would spend “whatever it takes” to wipe online gaming off the planet, and he has made no exceptions for online poker in that viewpoint, either.

At least we can take comfort that, so far at least, he hasn’t been able to get much traction going in Congress for the Restoration of America’s Wire Act (RAWA) bill that he must pin to his pillow at night and sleep on. But that’s not for lack of trying.

It’s no surprise that Adelson’s wealth has slipped slightly, and by “slightly” we mean by $10 billion. The casino magnate’s fortune is intrinsically linked to his investments in Macau, the semi-autonomous Chinese enclave that transformed him from super-rich to uber-rich and from mere tycoon to towering plutocrat.

The anti-corruption crackdown from Beijing has hurt Macau, and Adelson is bound to be feeling the pinch, too. But reports today that the gambling hub has reported its best revenue in 20 months suggest things could be looking up for the 83-year-old casino boss.

Adelson isn’t the only billionaire to have had a lousy year, in so far as you can have a lousy year while still having many billions. Forbes cites “volatile stock markets, cratering oil prices and a stronger dollar” as the reason for a “dynamic reshuffling of wealth around the globe and a drop in ten-figure fortunes for the first time since 2009.”

As poker fans, do we have any billionaires on our side at all?

Mark Scheinberg, former owner of PokerStars, along with his father Isai, is sitting pretty at 369th with $4.1 billion. However, while Amaya may be busy lobbying to push for regulated online poker in the US, we imagine Scheinberg keeps his nose well out of such things these days.

A little further down the list, at 495, we find Teddy Sagi, the British-Israeli owner of online gaming software giant Playtech, which is also operator of the iPoker Network, the fourth-biggest poker network in the world.

Among other notables from the gaming world on Forbes’ list is Carl Icahn, the corporate raider who, it was announced this week, has officially saved the Trump Taj Mahal from bankruptcy. He now owns two casinos in Atlantic City, the Taj and the Tropicana, and he trumps Donald Trump on the richest list by 281 spots, coming in at 43rd with $17 billion.

Icahn’s takeover of the Taj represents the end of Trump’s last stake in Atlantic City. Trump had permitted the casino to continue using his name in return for ten percent of the company. The Donald appears 324th in the rankings, with $4.5 billion, making him just a mini-billionaire, compared to some others.

Finally, poker fans may be interested to see “the Banker” Andy Beal on the list, a man whose heads-up high stakes games against various well-known pros in the noughties have become the stuff of legend. He’s sitting at a healthy 115, with a net worth of $9.4 billion.