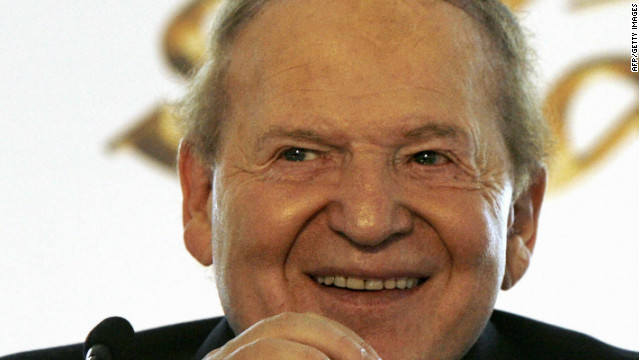 Sheldon Adelson lost the RAWA battle this year, but will his ownership of the Las Vegas Review-Journal going into 2016 increase his sphere of influence? (Image: AFP/Getty)

Sheldon Adelson has been making news a lot lately, and now he has bought some.

The Las Vegas Sands CEO’s rumored purchase of the Las Vegas Review-Journal has now been confirmed by various sources, while his beloved anti-online gambling bill RAWA (the Restoration of America’s Wire Act) has bitten the dust in Congress for another year.

RAWA, as every online poker player knows by now, is the bill that seeks to outlaw online poker and casino gaming at a federal level, and it is dead, for now, at least.

Politico.com reports that the bill, introduced in the House this year by Representative Jason Chaffetz (R-Utah), and in the Senate by Senator Lindsey Graham (R-South Carolina), failed to attach itself to a must-pass omnibus spending bill on Wednesday, and now has nowhere to go but to sleep until 2016, anyway.

This is, in fact, the same fate that befell RAWA at the end of the 2014 legislative session.

RAWA has always been an unpopular piece of legislation on Capitol Hill, mainly because of the stench of crony capitalism that surrounds it, and its trammeling of states’ rights to determine their own gambling laws.

Sheldon Adelson is believed to be the architect and financial backer of the bill, which he has apparently pushed to protect his own land-based casino business interests. Even that makes little sense to most folks, as the vast majority of the industry, Steve Wynn largely excepted, is totally behind the synergy of brick-and-mortar to online gambling sites.

The tide really appeared to turn against RAWA at a congressional hearing of the bill last month, chaired by Chaffetz.

While the representative from Utah might have expected the debate to be driven by the anti-online gambling faction, the opposite was true, with committee members and numerous witnesses debunking the rhetorical arguments of RAWA backers and offering their support for safe regulation and each states’ choice to determine yay or nay instead.

Ironically, Nevada State AG Adam Laxalt was one of those eight, despite the Silver State already being legal and regulated in the online poker game since 2013.

While Adelson may have lost this particular battle, he’s by no means done, and so the revelation that the LVS casino mogul has become the new owner of the Las Vegas Review-Journal could be cause for concern.

Rumors of the identity of the new owner of the Las Vegas Review-Journal have been swirling for a week, not least among the newspaper’s staff, who were told last Thursday that the business had been bought for an over-market price of $140 million, and that they should “not worry” about the name of their new proprietor.

Needless to say, this unprecedented lack of transparency in the US newspaper industry had the journalists worried. Meanwhile, the fact that the paper was purchased at a premium price at a time when the print media industry is struggling suggested that the buyer was not looking for a financial investment, but perhaps had a strategic motive instead.

Adelson’s name cropped up in speculative media reports throughout the week, but he was ultimately confirmed as the new owner last night by the investigative endeavor of the RJ’s own journalists.

The deal was brokered by Adelson’s son-in-law, Patrick Dumont, who is also LVS’s senior vice president of finance and strategy, the reporters discovered. Following publication of this revelation, the Adelson family were forced to formally confirm that the deal was, indeed, with them.

Of course, the staunch Republican backer hasn’t merely bought the newspaper just to push his anti-online gambling agenda, although in a state where he remains the only casino owner unequivocally condemning regulation, it certainly won’t hurt.

How much his views will impact editorial decisions will no doubt weigh heavily on long-time RJ employees’ minds.

perhaps if S. Adelson sinks all his cash into various newspaper purchases he can get out of the gambling industry entirely. the poker world would appreciate it !