Shake Your Moneymaker: Chris Is Back on Top
March 25, 2014 Latest Poker News

Shake Your Moneymaker: Chris Is Back on Top 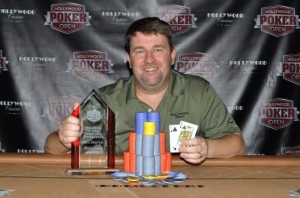 At long last – after almost an 11-year wait and with the will of poker fans everywhere behind him – 2003 WSOP Main Event winner Chris Moneymaker has pulled down another major tournament. OK, it’s not a major-major tournament, it’s the Hollywood Poker Open St. Louis Regional Championship, but we’ll take it. It does have the word “championship” in it, after all.

Has it really been 10 years and 10 months since Chris Moneymaker rocked the poker world by winning the 2003 WSOP Main Event? Well, yes, it has, because we just looked it up, obviously.

The mild-mannered Tennessee accountant singlehandedly kick-started the poker boom when he bested 893 of the world’s then-best players to win $2.5 million for an initial stake of $39. As an American “everyman”, he caught the public’s imagination, and crucially he was the first World Series winner to qualify via a satellite, thus making us all believe – rightly or wrongly – that we could do the same.

The floodgates opened. Moneymaker’s apposite last name was picked up by the mainstream press, because it obviously made excellent headlines, and meanwhile, the NHL strike of 2004 meant that ESPN was broadcasting reruns of his triumph over and over again.

With the “Moneymaker Effect” in full swing, entry to the following year’s WSOP Main Event tripled, with many hopefuls having won their way in through online satellites, inspired to emulate their unlikely new hero. Moneymaker’s effect on the poker world was immense, as, by extension, was our current desire at CardsChat.com for him to win another big event.

Don’t get us wrong, our man has come close before. In 2004, he came in second in the WPT Shooting Stars Main Event for $200,000, and bagged another second at the NBC Heads-up Event in 2011 for $300,000; both of those dwarf the $36,295 he won at the Hollywood Poker Open this week. He has won the odd side event at major festivals, too, but this is the first time he’s added a real trophy to the Moneymaker cabinet.

Moneymaker went into the final table in St. Louis with almost half the chips in play, and stayed well ahead of the pack throughout, eliminating seven of the nine final-table players. He had a bit of a sweat four-handed when he had Todd Bartlett all-in with aces (Bartlett) versus nines (Moneymaker) on a flop of 2-6-7, but an eight on the turn and a ten on the river – making Moneymaker a straight – offered us a glimpse of that famous good fortune of 2003. Beyond that, it was a short heads-up confrontation with Frank Wyville before the title was clinched.

Next stop on the HPO Regional Series is Hollywood Charles Town Races, in Charles Town, West Virginia, March 29. We wonder which of yesteryear’s poker heroes will emerge from the shadows to win that one. Wild Bill Hickock, maybe? Ah, we jest, welcome back, champ!