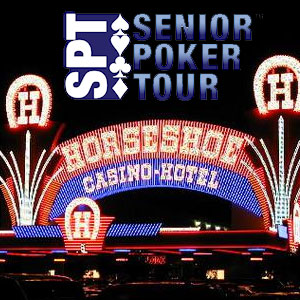 It might shock players, but there will be plenty of interest in the upcoming debut of the Senior Poker Tour in Tunica this week

In the movie, Ocean’s Thirteen, Al Pacino’s character famously said, “Tunica? That’s where games go to die.” With the upcoming debut of the Senior Poker Tour in Tunica, let’s hope it is not the place where some of the older statesmen of the game go to die. While it might be the opposite of conventional wisdom in an industry that is constantly marketing to teenagers and young men in their 20s, the Senior Poker Tour will kickoff from the Horseshoe Casino in Tunica, Mississippi from January 15-19, 2014.

The Next Big Tournament Series?

Yes, seriously. This new poker tour is set to launch later this week with the first day of the tournament starting on January 15, with the day before being reserved for satellite tournaments into the Main Event. There are seventeen tournaments set on the schedule, with Day 1A and 1B capping off the tour with the $550 SPT Championship Main Event.

For small to mid stakes live tournament players, over the age of 50, the Senior Poker Tour’s inaugural series features what appears to be a very well thought out schedule. Day One of the event features a $150+$20 No-Limit Hold’em event, a $200+$30 Omaha Hi-Lo event, and a $150+$25 No-Limit Hold’em Survivor tournament. Day 1A of the $500+$50 SPT Championship Main Event kicks off on Thursday, January 16, in addition to a $150+$25 NLHE Bounty tournament, a $200+$30 PLO event, and a $150+$25 HORSE tournament. This means that players who enter Day 1A and see a bad beat will have plenty of opportunities to continue their series on the same day. There are four events on Friday, including Day 1B of the Main Event, with Day 2 resuming on Saturday along with four other new tournaments. One tournament of note on Saturday, January 18 is the $100+$25 LIPS Ladies NLHE event. The final day at the Senior Poker Tour will feature the finale of the Main Event, which will be live streamed on the internet. There will be three other events that day, including a $200+$30 NLHE, a $300+$40, and a $150+25 PLO Hi/Lo event.

While some of the younger players might snicker, there are some serious names backing the Senior Poker Tour. Team SPT boasts Poker Hall of Fame members including Tom McEvoy and Linda Johnson. Other notable players include Jan Fisher, Susie Isaacs, Mark Kroon and Marsha Waggoner. While it remains to be seen if other big name players over the age of 50 will appear, having a couple of hall of famers certainly doesn’t hurt, along with other notable players.

Say what you will about seniors and poker, but the tournament series has plenty of momentum heading into its birth. There are almost 4,000 fans on Facebook, and leader boards will be posted on the official SPT website. This leader board will be keeping tabs on tournament results and eventually be used to determine the SPT’s Player of the Year, which will run on a calendar year.

Hope this tour does well. Looking forward to playing it in a few years!

“Yes, seriously” …. “While some of the younger players might snicker” …”Say what you will about seniors and poker”

I take it the author of this article is a young person? Why would younger players snicker at something like this?