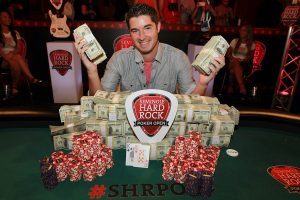 The Seminole Hard Rock Poker Open in Hollywood, Florida had its share of problems this year. In addition to not meeting the massive $10 million guarantee on its Main Event, falling short by more than $2.5 million, controversy arose when the $100K buy-in High Roller event drew only one table of players and changed the payout structure more than once.

Last year, the SHRPO broke ground in live tournament poker in the United States with its ambitious $10 million guarantee for the Main Event. With quite a bit of advertising, an experienced crew of journalists to cover and promote the series, and little competition from other live tournaments, the $5,300 buy-in Main Event attracted 2,384 entries for a massive $11.9 million prize pool. The tournament was well covered, well received, and professional poker player Blair Hinkle walked away with $1.7 million for winning the event.

This year, there was less promotion and fewer members of the media invited, as well as conflicts with other tournaments like the EPT Barcelona and WPT Legends of Poker, as well as smaller tournaments around America. The results reflected those changes.

The Seminole’s Poker Open Main Event this year had the same $5,300 buy-in and again allowed reentries, but attendance was low. There were only 1,499 entries in total, which created a prize pool that was more than $2.5 million short of the $10 million guarantee. The Seminole Hard Rock had to keep its promise and contribute the rest of the money to meet that guarantee, which created a sizeable overlay for the players.

There were big names in the tournament, especially as the payouts began and 2013 champion Hinkle aimed for a repeat. He did eventually exit in before Day 4, however, while quite a few names remained, such as John Dolan, Blake Bohn, Joe Kuether, Shawn Cunix, Russell Thomas, Curt Kohlberg, Mike Leah, and Dan Colman.

Despite many well-known poker pros being in Hollywood, Florida, for the SHRPO festivities, only a handful of them put up $100K to play in the Super High Roller tournament. Ultimately, there were nine entries, including players like Jason Mercier and Josh Arieh.

The controversy came into play when the players realized that it was going to be a one-table tournament with fewer entries than expected. Upon speaking with the tournament staff about the payouts, they were told that the top two finishers would be paid from the prize pool if no other players entered. Registration was still open at that point.

Per Jason Mo, one of the five players who ended the night with chips, Scott Seiver spoke to the Seminole staff, who then informed the players that the money would be split among the top three finishers. Seiver’s story differs, as he and Mo expressed their versions of it on a poker forum. What did not change, however, was that the SHRPO fluctuated on the payouts. What’s more, the tournament director wasn’t present at the Seminole, as he was on vacation.

Players were agitated, and poker fans expressed their displeasure on social media. Before the final five returned to finish the tournament on Tuesday, the Seminole decided to pay out the top three spots as promised, with $50,000 donated from the Seminole to the third place prize.

The tournaments have yet to end as of the submission of this article, and social media is full of complaints about the coverage of the final tables of the two most prestigious events of the SHRPO series.