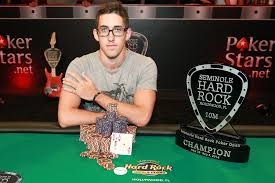 The Seminole Hard Rock Poker Open has becoming one of the premier events on the poker calendar over the past two years, in no small part because of the $10 million guarantee that organizers put into place in 2013.

That year, the tournament easily surpassed the guarantee, but organizers weren’t so fortunate in 2014, as they came up $2.5 million short, creating an impressively large overlay for players.

Despite that huge shortfall, the Seminole Hard Rock Poker Open (SHRPO) will be back again in 2015.

However, players can expect some major changes in the tournament structure, perhaps in response to what happened last year.

The Main Event buy-in will feature a $5,250 buy-in, but won’t allow for reentries this time around. The result will be a tournament with a $5 million guarantee, as well as one that features only one starting flight for players.

SHRPO To Have Television Coverage

But despite the lower guarantee, the 2015 version of the SHRPO Main Event will still likely attract many of the world’s top players. The tournament and several others from the SHRPO will be used as programming on the CBS Sports Network.

In addition, the Main Event will have its final table live streamed on Tuesday, August 18, along with the final tables of three other events, including two smaller side events and the $25,000 High Roller tournament.

All four tables will be played simultaneously, and commentary will be provided by none other than Phil Hellmuth.

“This year’s Seminole Hard Rock Poker Open Championship is an event not to be missed,” said Matt Savage, tournament consultant for the SHRPO. “With no reentry, the format becomes a level playing field for poker pros, satellite winners, and recreational players alike.”

Larry Frank, general manager of poker operations for Seminole Gaming, says that this year’s edition of the tournament series should “elevate the poker experience to a new level.”

“The Championship single-entry structure will provide a unique opportunity for players to compete for their share of the $5 million guarantee,” Frank said. “Plus, the chance to be part of the finale that showcases four final tables at the same time heightens the energy and excitement of this year’s series.”

The 2014 SHRPO Main Event was won by Dan Colman, who was in the midst of one of the hottest runs in poker history.

He had already won the World Series of Poker Big One for One Drop and would go on to win a total of nearly $22.4 million in live tournament play for the year.

The Seminole Hard Rock has become an important venue for tournament poker in recent years, and not just because of the SHRPO.

In the end, the tournament victory went to 22-year-old poker pro Griffin Paul, who earned $1 million for his victory. In heads up play, Paul had to beat successful tournament pro Joe Ebanks, finally knocking him off when Paul shoved on the flop with K9 on a KJ4 board, and was called by Ebanks, who held AJ.

The kings held up, and Ebanks was eliminated in second place, earning $615,000.