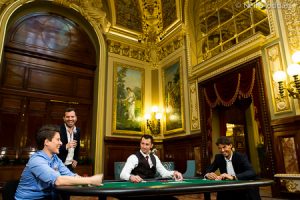 Rafael Nadal is known well beyond his home of Spain for his tennis skills and is currently ranked the top tennis player in the world. His foray into poker hasn’t been as celebrated, but a sponsorship with PokerStars gives him the opportunity to learn the game and play with some of the greatest poker players in the world.

Nadal recently met up with Team PokerStars Pro Vanessa Selbst in Monte Carlo for a heads-up poker match. Days before he competed in the ATP Monte Carlo Masters tennis tournament to presumably set a new record for numbers of titles won, he took some time to play against the top-ranked female poker player in the world. And Nadal lost.

Selbst and Nadal got together at the Casino de Monte Carlo in Monaco on April 11 to play for charity. The media were invited, and they showed up in droves to catch the two world stars on the green felt of the poker table together. And it was all to benefit Care International, as €5,000 (or approximately $6,900) was donated to the global organization dedicated to ending poverty.

The game was mostly a fun one, as both competitors were smiling and laughing throughout the heads-up match. Nadal commented, “It was a great honor to play against a strong competitor and although I lost, I had a lot of fun.”

Selbst was elated to play against Nadal. She plays tennis fairly regularly, at home and on the road, and she even asked the tennis legend about his game. She wanted to know, if they ever played a tennis match, if she could take one point from him. He smiled and responded, “Yeah, I might double fault.” She then tweeted after the poker game that it was an honor and pleasure to play Nadal.

Selbst beat Nadal in the poker match, but considered it a step in his poker journey. He has been practicing online and in live events, so the chance to play one of the top live tournament players in the game was a test for him. Selbst admitted, “Rafa played a great game, but the format and the cards were in my favor. I was able to win by using aggression in good spots and I also made a number of strong hands.”

Since Nadal has been working with poker coach Alfonso Cardalda, he has made progress. Cardalda commented, “He played very well against one of the best players in the world.”

His last live poker challenge was in December surrounding the EPT Prague festival of tournaments. He played an invitational sit-n-go with Daniel Negreanu and Fatima Moreira de Melo, as well as football legends Ronaldo, Andriy Shevchenko, and Alberto Tomba. Nadal had the skill to eliminate Negreanu from the tournament, as well as Shevchenko, and he beat Moreira de Melo in the heads-up portion of the SNG with Q-T against her T-6. He won €50,000 for his charity choice, The Good Hand Project, and experienced the thrill of victory on the green felt.

Nadal returned to the clay days after his Monte Carlo loss to practice for the ATP Monte Carlo Masters, where he will compete for a record ninth victory. Selbst headed to Sanremo, Italy, where she will play for even more credits to her already-historic winnings of more than $9.5 million.