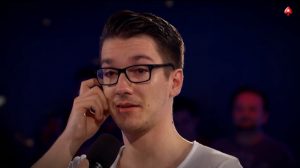 PokerStars EPT London has a happy winner in Sebastien Pauli. The German has become the second champion from his country of the European Poker Tour’s Season 11, and the EPT’s 100th champion, topping a hugely entertaining final table at the EPT London.

Some 675 hopefuls packed the palatial Grand Connaught Rooms in Covent Garden to fight over the $4.2 million prize pool, but when the final chip hit the felt, it was Pauli who was left to fight back the tears as he struggled to comprehend just what an enormously big deal it is to win an EPT Main Event.

Just call him the anti-Daniel Colman. “I can’t really tell you how I feel. It means so much to me,” said the clearly overwhelmed 25-year-old student from Dortmund, Germany afterwards.

“What’s the reason for all this emotion? Is it that all your friends are here? Is it the money? Is it the title?” asked Joe Stapleton, whose slick TV interviewer approach did not quite prepare him for such a passionately demonstrative interviewee.

“It’s the title. Especially in London. It’s always a tough field,” Pauli said, words sticking in his throat. “I’ve always watched the coverage of the EPTs, and … it’s a dream come true.”

Even the most battle-hardened and world-weary poker reporter could not help but raise a toast at Pauli’s win and his accompanying deeply heartfelt reaction. It certainly beats the post-match celebrations of poker’s new anti-hero, Daniel Colman, who greets each multimillion-dollar victory with the look of a man who just opened a telephone bill that is marginally larger than he had expected.

While Colman has reminded us that poker has, in his own words, an “ugly side” that “targets people’s weaknesses,” (which has benefitted him quite well, with some $22 million in total tournament cashes this year alone), Pauli has renewed our faith in a game that can be beautiful and life-affirming, a cerebral pursuit that is intense and exciting and life-changing. Most of us are, after all, fans of Moneymaker, and dream of following in his overnight success poker footsteps.

London has always been a special stop on the EPT. The hometown of event creator John Duthie, it’s been a fixture of the tour since Season One, and has resulted in some notable winners and memorable finals. This was no exception, with a final table that, in the UK’s Jake Cody and the US’s Kevin Macphee, included two previous EPT winners.

And as shocked as Pauli was by his own victory, it was relatively easy in the sense that he held the chip lead throughout. Macphee, by contrast, began the final table as the shortstack, but clawed his way into contention to square off against Pauli heads-up. Ultimately, though, we found a worthy winner in the 25-year-old German, who takes a tear-splattered $900,000 with him back to Dortmund.

Elsewhere, in the UKIPT Grand Final, the culmination of PokerStars’ grassroots tour, which is held each year in conjunction with the EPT London, Brett Angel defeated the unfortunately named Fabrizio Fuchs (yes, it’s pronounced like that), while notable side-event winners included the irrepressible Sorel Mizzi and UK young gun Tom Middleton. There was also a welcome win for London “get-it-quietly” cash game legend Jeff Duval, while Olivier Busquet won yet another High Roller Event. Ho hum.

Next stop for the EPT: Prague.