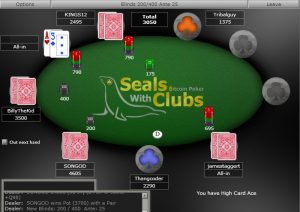 Seals with Clubs has announced it will be going offline for good, following a week of security breaches that left owners fearing for the safety of users’ deposits. (Image: bitcoincasinopro.com)

Seals with Clubs (SWC), the Bitcoin-only poker site, has announced its closure. Following a week of being offline, a notice was posted on the website explaining its decision to cease operations.

“On approximately February 11th, 2015, several events occurred related to operational security that we consider to indicate Seals With Clubs now operates in a perpetual state of jeopardy,” the statement read.

Player funds, the site claims, will remain available for withdrawal for “a limited period of time.”

While the executive team indicated a breach, or at least a threat of one, occurred, the statement refused to go into details publicly regarding the security concerns.

“We do not believe any of our Bitcoin wallets used in operations to be compromised or lost,” SWC said in its press release. “This event has made the majority vote of the ownership and team agree shutting down operations is the best move for safety and security purposes.”

Although the news is a certain setback for those who wish to play poker with Bitcoin, not all is lost. SWC Chairman Bryan Micon plans to move forward with the business, albeit in a repackaged manner.

SWC software 2.0, which was supposed to be released this March, will be deployed on Micon’s new site, swcpoker.eu. A timeframe wasn’t detailed in the press release, but SWC said Micon “will have all the resources at his disposal to bring the new site up, backed by the new SWC 2.0 software package, at a rapid pace.”

But will current SWC users migrate to Micon’s new site amid the continued vulnerability of Bitcoin?

During the weeklong outage and through the notice of cancellation, SWC attempted to play down the overall seriousness of the situation. The company joked on Twitter that it had tried the “turn-off-turn-back-on” method, and also attempted the old Nintendo “blow on the cartridge” trick.

But it appears the Seals with Clubs downfall is anything but a laughing matter.

A “perpetual state of jeopardy” signals the company believed it was only a matter of time before some sort of cyber threat completely wiped out its operation. Should that have occurred, all Bitcoins stored in player accounts undoubtedly would have been lost. SWC closing on its own terms was likely in the best interest of all involved.

Valued at over $1,100 per Bitcoin back in November of 2013, the digital currency has plummeted ever since, and taken associated markets and websites along with it.

The currency is favored for its decentralized and anonymous nature, Bitcoin, which was once being eyed by Wall Street investors, has become nothing more than a financial disaster. Due to its inability to be regulated by governments, Bitcoin became popular among Internet poker enthusiasts, but has had a rocky road the past few years, both in and out of the online poker universe.

Whether to do with online poker or not, the cryptocurrency has had its share of news-making moments over the past few years. Some highlights include:

The Dark Web site’s creator was found guilty earlier this month of operating the underground marketplace that catered to illegal activity, including the selling of drugs, and weapons, and even hitmen services. Silk Road used Bitcoin exclusively to help cover the identity of sellers and buyers.

A popular Bitcoin exchange in Tokyo, Mt. Gox filed for bankruptcy a year ago, after declaring 744,000 Bitcoins, or $450 million at the time, had been stolen. Speculation remains that it was an inside job.

Countless Bitcoin users have been fooled into believing their digital wallets are full, when in reality, they’ve been wiped clean by hackers. Malware and botnets have stolen an unknown number of Bitcoins, but it’s thought to be in the equivalent of millions of dollars.

If you cant trust Micon the who can ya trust