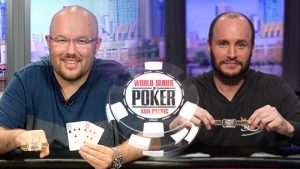 Scott Davies and Mike Leah got it done at WSOP APAC in Melbourne, Australia. (Image:calvinayre.com).

While this year’s ten-event APAC series was largely dominated by Aussie poker players, New Jersey native and Vancouver, BC resident Scott Davies was destined to take the $10,000-entry APAC Main Event title and a whopping $850,136, while Toronto, Ontario native Mike Leah steamrolled the $25,000 High Roller event for an impressive $600,000.

In a five-day tournament that included two Day 1 flights, the $10,000 APAC Main Event generated an enormous prize pool of $3,125,000, enticing a competitive field of 329 runners. Among them were several past WSOP world champions, including Greg Merson, Joe Hachem, and 13-time bracelet winner Phil Helmuth, as well as 2014 Player of the Year George Danzer.

By the final day however, only six players remained, with Davies poised to achieve a goal he has chronicled in a blog entitled “My quest for a WSOP bracelet”. He would ultimately land heads up and evenly stacked against Jack Salter of the UK, and the pair battled for only two hours before engaging in a fateful hand in which Scott flopped a full house holding pocket sixes, against the trip tens of Salter who held Qc Tc.

Fireworks ensued on a turn of 8s, as the two each committed their stacks all in, then a harmless 3 of spades fell on the river to complete Scott Davies’ quest for tournament gold, leaving Salter with a respectable $516,960 for second place.

Scott, a former attorney turned poker pro, said the following to the WSOP afterward: “This is the Super Bowl to me. It’s all I’ve ever wanted. When I decided I was going to play poker for a living I just remember Chris Moneymaker winning the Main Event and thought one day I might get a chance to do that…now I’ll have to change the [blog] to ‘My Quest For Two WSOP bracelets!'”

In a Super Bowl of his own, Canadian and Team Ivey Poker Pro Mike “GoLeafsGoEh” Leah went to work on a field of 67 competitors in the APAC $25,000 High Roller event, which also included a number of poker A-listers such as 2010 WSOP Main Event Champ Jonathan Duhamel, and 2012 November Niner Jesse Sylvia, who both made the final table.

A formidable player himself, Leah recently placed second to Daniel Colman in the Seminole Hard Rock Poker Open in Hollywood, FL for a best live cash of $1,047,638.

And while a WSOP gold bracelet had eluded him going into the High Roller, it wasn’t long before the wait would be over, as he arrived at a final table of six with more chips than the combined stacks of his five opponents. He ultimately made good on a guaranteed win via Twitter by dispatching runner up David Yan, as the Kd 4s of Yan could not improve against Leah’s Ks 7d.

With WSOP APAC in the books, all eyes are now on the November Nine as the 2014 WSOP Main Event finalists prepare to battle on ESPN for a diamond-studded gold bracelet, and a massive $10 million top prize reserved for the world’s next poker champion.