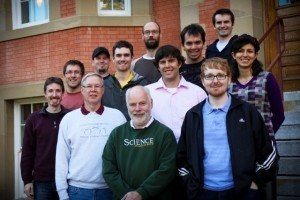 Scientists and developers at the University of Alberta in Canada have claimed to have created the ultimate computer software program that plays limit hold’em perfectly. (Image: UAlberta.ca)

Scientists and researchers from the University of Alberta in Canada are claiming they have built a computer program that plays perfect poker that is unbeatable.

The developers behind the new computer software program stated to multiple scientific journals and news outlets that they have “solved” Fixed-limit heads-up Texas Hold’em.

Multiple outlets have hailed the software program as a breakthrough in artificial intelligence.

It allows a computer to master the limit variation of Texas Hold’em in a heads-up (only two players) format. According to the scientists, the game played by the computer is done so without any mistakes, much like the game tic-tac-toe.

The algorithm that fuels the artificial intelligence was named “Cepheus” and those that creating it claim it is guaranteed not to lose.

Computer scientists Michael Bowling, who is associated with the University of Alberta, said that his team has developed a strategy that guarantees a player will not lose.

He did go on to say that it would be a break-even game and that only when a human player (or lesser developed algorithm) makes a mistake they would lose.

Their work has been published in respected journal, “Science” and researchers are calling for poker players from around the world to test the program at Limit Texas Hold’em online.

The results are expected to make players rethink their moves. Bowling told journalists that they’ve discovered facts behind commonly held beliefs in the game.

For example, Bowling said that re-raising with very low pairs as a dealer offers an advantage, which Bowling claims is a move that most good players would not make.

Claiming that Limit Heads-Up Texas Hold’em is now “solved” it appears, if the research is to be believed, that there is always an optimal way to play that will never result in a loss.

This marks the first time that researchers have taken the time to solve a game competitively played by humans that involves imperfect information, unlike Chess.

While the results apply to only the most basic form of poker and not to more commonly played games like six or nine-handed no-limit Texas Hold’em, there are still 10,000 billion decision points possible.

The strategy grid created took up more than 10 terabytes of data and in comparison, Bowling said that the English-version of Wikipedia is a thousand times smaller than that figure.

Because of that fact, it’s widely expected that it is near impossible for a human to “solve” the game similar to their algorithm.

The researchers have laid down the gauntlet to the poker community to take on their intelligent system.

They hope to get players to participate and uncover rational behind some of the decisions the system makes.

Bowling said that he hopes poker enthusiasts will comb through their system and create insights. He stated he has mathematical proof that in the long run, human players simply cannot win.

Players interested in learning more about the Cepheus Poker Project at the University of Alberta can check out the official website (http://poker.srv.ualberta.ca/) and for those adventurous enough, can click click through various buttons to absorb information about the perfect poker playing computer intelligence.

I would love to see Phil Hellmuth test this!! Haha

I best cepheus. It seems you either trounce it or it does the same to you with ridiculous good hands. It raises anything but the joker & advert cards. Bluffs on check x 2. Elephant is that there are only 2 players so what control sample is that? They need to have 5 player & you can choose either 4 friends against each other or 4 bot generated players. It deals to many long shot cards (both for & against) to make me feel it is authentically random dealing.