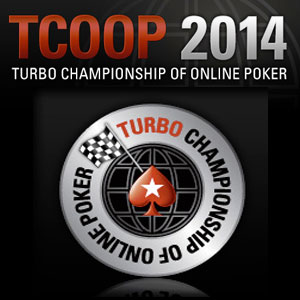 PokerStars’ third annual Turbo Championship of Online Poker will bring another round of fast-paced action to players with a Main Event that has a guaranteed $2 million prize pool.

The third annual Turbo Championship of Online Poker (TCOOP) is set to happen this month. PokerStars has announced the schedule for the championship, which will take place from January 23 to February 2 where $15 million is guaranteed across 50 events.

Main Event and Player of the Year

In keeping with the tradition of every major PokerStars event, the players that perform best over the course of the entire series will take even more home. Further prizes will be given to the players who consistently do the best during TCOOP. A Player of the Series Leader Board will give out the following rewards:

TCOOP’s fast-paced action gives the event a large advantage over similar online festivals. Players who don’t have a lot of time on their hands but still seek the thrill of playing can benefit a lot from TCOOP. The quick tournaments are also great for professional players seeking to boost their hourly rate. In the previous two Turbo Championships, the average time for a player to cash was only 2 hours and 10 minutes. Meanwhile, the quickest tournament was a hyper-turbo that took only 1 hour and 37 minutes.

“TCOOP has become an unmissable online festival for me, because the speed of the tournaments means you can win five and even six-figure sums in just a few hours,” said Team PokerStars Pro, Lex Veldhuis. “Plus, the wide range of games and tournament formats means there’s always something different to play each day.”
Online qualifier satellites for every event in TCOOP will be run by PokerStars. Cash buy-ins will start at $0.22 and Frequent Player Point buy-ins at 5 FPP. Qualifiers can be found through the PokerStars client in the TCOOP section. Players also have the ability to buy into the majority of TCOOP events with Step tickets 1-6.

The first ever Turbo Championship of Online Poker took place in January of 2012. More than $19 million was awarded to players. Main Event winner “betudontbet” took away $382,855,67 and Scott “Mongy” O’Reilly received the Player of the Series honor. The 2013 edition of TCOOP ran from January 17-27 and $24 million was awarded over 50 events. The fast schedule of tournaments saw “frma1103” win $326,880 over a field of 5,060 players. Player of the Series went to “Tjepan” who was also given a prize package to the 2014 PokerStars Caribbean Adventure in addition to his trophy.