Savage Prop: Can Mike Noori Eat $1k Worth of McDonald’s in 36 Hours?

Competitive eaters, place your bets. In a proposition wager that some might find hard to digest, poker pro Mike Noori and tournament director Matt Savage have agreed to see just how much McDonald’s one man can stomach. 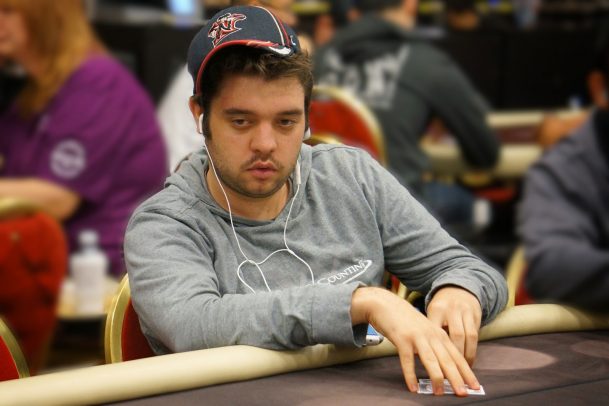 Poker pro Mike Noori could be a glutton for punishment after accepting a challenge from tournament director Matt Savage, who thinks its possible but unlikely that someone could eat $1,000 worth of food from McDonald’s in 36 hours. (Image: LAPC News)

No one has divulged specifics about how much money is at stake, but poker pro Mike O’Malley, who was one of the bet’s conceptualizers, acknowledged that the wager was in a six-figure range.

The bet is that Noori cannot eat $1,000 worth of McDonald’s food in 36 hours or less. The wager will take place at Savage’s annual golf tournament in Arizona on May 20-21.

O’Malley provided details on a radio show about sports betting, hosted by Mitch Moss and Paul Howard on Sirius Radio.

Noori is supposedly getting 5-to-1 odds on the dare, and other terms and conditions apply. For example, drinks do not count toward the total spend, salads can only account for $200 of the $1,000, and Noori will only be allowed to vomit once.

Social media has been abuzz about this side action. Dan Bilzerian helped kick off this story’s virality when he tweeted about the contest. Savage posted a picture of a man in a Hamburglar costume to announce the news, saying Noori would be wearing the outfit when he performed the feat.

This unusual prop originated from a discussion about catering for Savage’s golf outing. Savage reportedly had heard Noori joke about the food at his annual event, saying he could cater it from McDonalds for less. That led to a comment about how Noori could probably eat $1,000 worth of the fast food. From there poker pro Tyler Patterson bet he couldn’t do that in 24 hours, and the soon they were hammering out details and setting real parameters for the bet.

“We started talking about can he do it, can he not,” O’Malley said on the show. “Then we started figuring out what goes into it. It probably took us a week to figure it out. He accepted it and that was it.”

Plenty of people doubt whether it’s even possible for 27-year-old Noori, at 5-feet-10-inches tall and weighing 210 pounds, to win the bet. Savage believes its possible.

Some questioned Savage’s math, however. With two bags of apple slices costing $1, and three slices in each bag, Noori will have to eat 3,000 pieces of fruit at a pace of about 84 an hour, in addition to downing about 40 salads. That still leaves $300 and the rules state it must be spent on hot food items, with $50 being in hamburgers.

The overall tally of who has how much action on each side of the bet has not been made public. But Noori tweeted last week that there was more than $200,000 at stake, and his share was only “a tiny piece of it.”

This is not the only bet Noori has out there related to the food he consumes and his waistline. Another group venture contends Noori will weigh more than 225 pounds when he is 40.

For both bets, he may just have to be sure not to order too much from the Extra Value menu.

I would put my money on him not making it. Can I get a piece on this?

No thanks, that’s a fate worst than death.