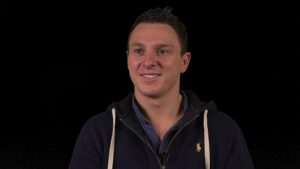 Sam Trickett has become the latest poker pro to join the partypoker family.

Continuing its trend of recruiting high profile players to represent its brand around the world, partypoker has drafted in the UK’s highest earning tournament player, Trickett.

The move not only adds another star name to the partypoker roster, but signals another break away from the industry norm.

Party Going Its Own Way

Over the past 18 months, the trend among major industry players like PokerStars has been to increase their appeal to recreational players by recruiting celebrities and sports personalities.

For PokerStars, soccer stars Cristiano Ronaldo and Neymar Jr have helped promote games such as the new Beat the Clock to a mainstream audience of millions.

Although this strategy has certainly proven useful for some sites, partypoker appears to be sticking more to the tried-and-tested method of using successful poker pros to bolster its brand image.

The former 888poker sponsored player has just over $1.3 million in live tournament earnings, including a second place finish in the 2012 WSOP $3,000 No Limit Hold’em event. This professional résumé, combined with her Australian heritage, made her a target for partypoker’s efforts in Australia.

Continuing this strategy, the operator is now harnessing the pulling power of the UK’s Trickett. Formerly a sponsored pro with Titan, Everest and, most recently, Indian poker room Starpoker, Trickett brings a considerable amount of professional credibility with him.

On top of winning domestic, European and international titles, Trickett has more than $20 million in live earnings. That haul puts him eighth on the all-time money list and sits as a testament to his skills at the felt.

A Traditional Type of Party

In fact, it’s this financial might and status within the game that partypoker will be hoping to exploit in the coming months. Trickett will be representing partypoker at live events throughout 2017, but beyond that, he’ll also be hosting a series of private online cash games.

In keeping with his high stakes reputation, Trickett will be sitting down at a selection of specially created, invite-only tables known as Trickett’s Cash Games. As well as regular players being able to win a seat in these games, the big money spectacles will be open for fans to rail.

By making its high stakes action a public affair, partypoker is harking back to the heyday of online poker. When Full Tilt was at its peak, players would login just to watch the likes of Tom Dwan, Patrik Antonius and Viktor Blom play for nosebleed stakes.

With Trickett on board, partypoker appears to want to recreate that sort of buzz. If this tactic proves successful, then it will not only help the site’s traffic flow but go against the current industry ethos of appealing to recreational players with celebrities and low stakes innovations.