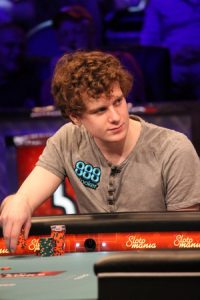 2011 WSOP November Niner is moving on from a pro poker career at only 24, with plans to study philosophy. (Image: 888poker.com)

Several players have had their lives changed by poker. After all, it only takes that one big win to cash in an early retirement. But building a career dedicated to poker isn’t always easy. Players are constantly at the felt bidding piles of cash away. Tournament after tournament can lead to sponsorships or a clever nickname that every publication will begin referring to you as. Yet there’s a life outside of the cards and some will put poker on hold to pursue other dreams. Former November Niner Sam Holden is the most recent player to take that plunge.

At the age of 24, Sam Holden revealed that he will be taking a “semi-retirement” from poker. In doing so, Holden will put his three-year stint as an ambassador to 888poker behind him. The decision came after Holden received news that he had been accepted by the University of Kent to pursue a degree in philosophy. His attendance at Kent will begin in September for the three-year program.

In response to the support he had received during his poker career, Holden wrote a lengthy blog post to help explain the reasoning behind his decision.

“I’ve spent four incredible years playing poker full time and I never dreamt that my favorite card game could give me so many opportunities and experiences,” said Holden in the post, published on 888poker.com. “Being able to travel the world, record television programs, meet people from every corner of the globe and enjoy some of the best restaurants and clubs, all while earning money playing a game, is a privilege not lost on me, and a journey that has taught me a lot. More recently though, I have lost a lot of drive to play poker, especially in live tournaments.”

Holden established himself in the poker world when he became a member of the 2011 World Series of Poker November Nine. At the Main Event final table, he finished in ninth and made off with $782,115. His success continued at the 2012 WSOP Main Event, where he finished in 55th place for $128,384. A series of event wins including a recent 26th place finish at the WSOP Europe Main Event for $29,398 – and his position at 888poker – continued Holden’s time in the limelight.

Last year, however, Holden moved back to Canterbury after a two-year stay in London. Success in poker gave him the ability to buy his own house, which he states was a long-term goal of his. After making the decision not to move back to London, Holden felt stable and lost the financial motivation to play poker.

Part of Holden’s reason for entering into the poker world was the appeal of the lifestyle of traveling around and building a nest-egg of money. Though he didn’t see it as a career for the long term, it was a better option than going into a competitive job market fresh off of getting a degree. Holden saw himself more satisfied with the simple things in life, rather than the fun and luxurious world of professional poker player.

In his pursuit of a philosophy degree, Holden has been inspired by Phil Gruissem and his concept of effective altruism. Holden is glad that he used part of his winnings to significantly donate to charity, but thinks he could make a larger impact in a different career. After obtaining his degree, Holden sees different possibilities for himself, including continuing academics or working for a charity group.

Still, the young “former” pro doesn’t see himself completely disappearing from the poker world. He plans on competing in various live tournaments and even mentions he has been qualified for Nottingham. Holden cites larger tournaments – especially some experienced in Las Vegas – as uncomfortable. The financial competitiveness did not rest well with him and the frequent trips felt like overkill.

“I’m really excited to start travelling for pure pleasure and note dependent on the best poker tournaments,” Holden concludes on a positive note in his farewell blogpost. “I’ll still play a bit online, hopefully ticking over enough money to pay a few bills. I do still enjoy the game, throughout my career I’ve been lucky enough to only have to play when I want to; this has had the added bonus of ensuring that I play closer to my best. I don’t want this to change, which is why it is time to move on, to tackle some new challenges and continue to enjoy this great game as a hobby for the rest of my life.”