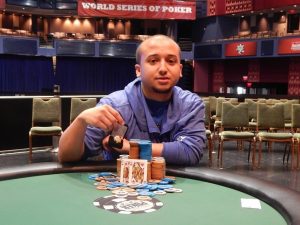 Ryan Jones has set up the perfect run-in for the World Series of Poker with victory in the WSOP Circuit event at Harrah’s Cherokee in North Carolina.

As well as almost doubling his previous tournament best, a $119,582 payout at the WPT Borgata Winter Open in Atlantic City, Jones wins a seat in the National Championship which takes place at the end of the current season.

Jones went into the final table fourth in chips, and made short work of clawing his way up to become chip leader.

With seven players left, following the departures of Garry Simms in 9th for $22,271 and Peter Vitantonio ($28,048), Jones was a comfortable chip leader.

However, when it came to the heads-up against David Williams (not to be confused with the WPT-winning former PokerStars pro), Jones found himself a 9.8 million-to-5.9 million dog in the chipstacks.

Jones wasted no time in firing a third barrel on a K turn, and all the money was in after Williams raised to 1.3 million.

Williams may have thought he was in decent shape, holding K-8, but his two-pair was being crushed by the K-Q of Jones.

Only a third 8 would have won it for Williams, but as the 4 fell on the river, it was enough to give the North Carolina player the ring and send his rail wild in jubilation.

“Winning at home was pretty special for sure,” Jones said after the tournament, coveting his WSOP Circuit ring.

“It feels pretty good. I’ve had a couple [of] deep runs and couldn’t close the deal, so it felt good to finally get it done. I’d like to thank my mom and my grandma for taking care of me all my life, and now I get to pay it back.”

WSOP-C On the Move

The Circuit now moves on to Harrah’s New Orleans from April 30-May 11, and finishes up in Connecticut as Foxwoods hosts the final Circuit tour leg before Las Vegas takes over for the World Series of Poker proper.

What chances that Ryan Jones will be putting some of his newfound poker riches to good use once the serious action starts at the Rio from May 29?