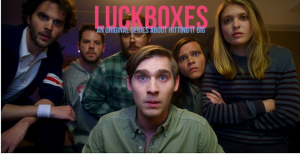 LUCKBOXES, the new project from Ryan Firpo, was inspired by the characters and stories he encountered filming BET RAISE FOLD. (Image: luckboxes.tv)

LUCKBOXES: An Original Series About Hitting It Big is a new pilot poker comedy, just completed by Ryan Firpo, writer-director of the documentary BET RAISE FOLD: The Story of Online Poker.

He was also the creator of the now legendary documentary from Busto to Robusto: Captain Zeebo, a following the up-and-down adventures of poker player Greg Avery.

BET RAISE FOLD was a brilliant but sometimes gloomy journey through the rise and fall of online poker in the US, as seen through the eyes of four players who had lived and breathed the poker boom; “the boom that manufactured a dream,” as Firpo’s collaborator on the project, Jay Rosenkrantz once put it.

LUCKBOXES recalls only the good times.

It follows two brothers, college graduates who finished top in their class, who are forced to take on jobs as furniture delivery men to save the family home from foreclosure when, at the height of the Great Recession, the post-graduate job market proves to be a struggle.

A chance delivery address unites them with a young group of online poker players living in a mansion and making big bucks. Hilarity, we trust, ensues.

You can view the trailer here.

BET RAISE FOLD, released in 2013, used interviews with poker players recorded post-Black Friday; players who had, through online poker, witnessed the birth of an industry, as well as a whole new subculture that had made them rich.

That subculture, was taken away from them. But LUCKBOXES exists entirely in an innocent pre-Black Friday bubble, in the time and place, perhaps, that Firpo was happiest. And it was, in fact, his experience filming BET RAISE FOLD that inspired him to write a poker-based sitcom.

He was, says his website, “exposed to an eccentric subculture of former athletes and computer nerds who won and lost millions of dollars on a weekly basis playing online poker, all before their 21st birthdays.

“Upon completion, he began developing a scripted comedy series inspired by the bizarre characters and wild stories he experienced along the way. LUCKBOXES is a fictitious re-telling of the ‘online poker story’ filled with fortune, fame, humor and heart.”

LUCKBOXES, then, is inspired by true events, but it is also, according to Firpo, about “the bittersweet experience of becoming an adult.”

Firpo hopes the pilot will lead to funding to create a series, which would either be streamed online or shown on cable.