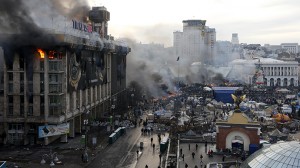 A Kiev trade union building in central Kiev was set on fire on February 19; part of a series of acts of civil unrest and rioting in the Ukrainian city (Image: Reuters / Vasily Fedosenko)

The chaos caused by the civil unrest and rioting occurring in Kiev, Ukraine has captured the attention of the entire world. While the citizens of every nation watch the unity and harmony the Olympics are supposed to bring, the near apocalyptic conditions in Kiev are a stark juxtaposition. Now, according to multiple media outlets, it appears approximately 150 poker players were locked inside the Khreschatyk Club, which is located in central Kiev, as of Wednesday.

The Russian Poker Tour’s Main Event was to be a celebration of poker in both Russia and in the Ukraine. Regretfully, riots have broken out and resulted in bloodshed in the streets of Ukraine’s capital city.

With approximately 150 players trapped inside the poker club, the players and staff were locked inside, trying to keep calm and weather the storm. The mood was described as “not very good,” and all doors and windows were locked shut. The staff refused to allow anyone entrance to the club, as well as refusing to let people leave for their own safety. According to reports, there wasn’t even enough water for everyone. Ventilation was shut off, since there was too much smoke coming in from the streets into the club to allow for breathable air.

Even the club’s website noted the club shutdown, as of Wednesday night.

The tournament, as well as cash poker games, apparently continued to be played despite the dire situation the players were in. With both Day 1A and Day 1B of the Main Event over, however, it was reported that some players were passing the time playing cash games. Others, however, just tried to get some sleep in their chairs.

Deadly violence has broken out in an anti-government campaign, bringing bloody clashes between rioters and police. The political crisis flared up last November, and at least 11 demonstrators and seven police offers have been killed in gruesome street warfare. According to media reports, hundreds more have been injured and the violence is continuing as of the moment of this article’s publication. The trade union building, which was housing some political opponents, was ablaze on Wednesday morning, with snipers targeting lead protesters.

With all the political unrest occurring since last November, many in the poker industry are harshly criticizing the choice of Kiev as the location for the Main Event on the Russian Poker Tour. Under the current conditions, players are obviously unhappy that the event was not rescheduled, or moved to a more secure location. Recently, American Vice President Joe Biden urged Ukraine’s President Viktor Yanukovych to withdraw government forces and to exercise restraint. Two opposition leaders arrived for talks as of last night.

The Khreschatyk Club is heralded as the biggest poker club in Central Europe. It features 24 tables to play poker, with tournaments being held daily. The posh club has hosted events for the World Poker Tour, and the World Series of Poker according to its website. They also hold tournaments that have prizes “up to $750,000” and offer Turbo Deep Stack Weekends.