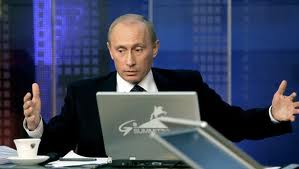 “Hey, why can’t I get on PokerStars?” Vladimir Putin finds out the hard way that his telecoms regulator is getting too big for his boots. (Image: rumproast.com)

A fresh wave of Russian ISP blocking left thousands of players in the country unable to access PokerStars over the weekend, as they turned instead to Russian-language poker forums to voice their displeasure.

The block was confirmed by PokerStars Russia’s Twitter account, which provided a link to a new client that would restore access, as the operator plays a cat and mouse game with the Russia government.

But Roskomnadzor seems to have upped its game in the past few months. It recently disconnected the whole of Amazon’s cloud hosting service for running an ad for 888poker, disabling access to everything from NetFlix to Twitter and Dropbox in the process.

According to Poker Industry Pro, one recent incident saw six different ISPs blocking access to PokerStars at once. Although PokerStars itself would be unlikely to release such data, it has been estimated that 8.4 percent of the players in PokerStars.com’s international player pool are playing from Russia.

Russia has been pushing for increased controls over the Internet for some time. In 2012 it proposed an amendment to a UN telecommunications treaty that would restrict access online “where international telecommunication services are used for the purpose of interfering in the internal affairs or undermining the sovereignty, national security, territorial integrity and public safety of other states, or to divulge information of a sensitive nature.”

Later that year the country’s Supreme Court ruled that ISPs should be made to be responsible for blocking illegal gambling sites. In 2014 it added gambling domains for the first time to a blacklist of websites that included outlets that criticized Putin, as well as those that peddled drugs and pornography.

Russia is in the midst of regulating sports betting and has also made vague noises about doing the same with online poker, for which there is clearly a huge appetite and talent in the country.

In 2014 Russian daily politics newspaper Kommersant reported that the First Deputy Prime Minister Igor Shuvalov had instructed the Ministry for Economic Development and the Ministry of Justice to prepare a report on the viability of online poker regulation.

In early 2016, Alexander Zakondyrin, a Moscow politician and lawyer, told Business Insider that, in his opinion, the decision to legalize online poker had “already been made” by the Russian government.

When, or how, this will happen, and whether PokerStars will be invited to join the party if it does, is anyone’s guess.