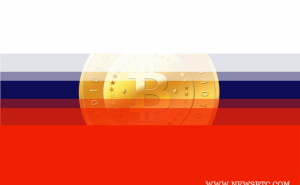 Russia is considering designating Bitcoin as a “foreign currency,” which would allow Russians to use it abroad. (Image: newsbtc.com)

Russia’s war against Bitcoin is losing steam: its antagonistic attitude toward the decentralized currency is now apparently thawing.

The country has been flexing its muscles against the digital cryptocurrency since 2014. Earlier this year, Russia even took steps to outlaw the use of all such monetary forms with a bill that sought to make their domestic illegal. The bill was presented to the Russian Duma, a legislative advisory body in the country.

The measure’s aim was largely a bid to prevent capital from taking flight in a country whose economy is straining under the weight of international economic sanctions. The latter were imposed in the wake of its 2014 annexation of the Crimea.

But it seems the difficulty of banning a currency whose sole purpose is to bypass all centralized monetary systems has finally dawned on the Russian state. The proverbial penny (a unit of currency, incidentally, which is still party to the regulation of centralized banking systems) has dropped.

There were also concerns that a full-scale cryptocurrency ban would stifle blockchain development in the country, a sentiment echoed recently by the Russian Central Bank.

Chatter in the media last week suggested Russia’s Ministry of Finance was considering creating its own nationally regulated digital currency to be used alongside the ruble. That tack promised to be more convenient for Russians, while reducing the costs of currency transactions in government licensing exchanges.

Whether these plans are progressing is unclear, but a Ministry of Finance official, who spoke to state-owned newspaper Rossiyskaya Gazeta this week, highlighted a new direction for Russia’s anti-Bitcoin bill.

A proposed amendment would still ban Bitcoin and other cryptocurrencies domestically, but it would offer a carve-out, designating them as foreign currencies. This means Russian users could still buy Bitcoin through exchange platforms to spend it in other countries without fear of prosecution.

“Can Russian citizens have a wallet and pay Bitcoins in those countries where it is allowed? Why not?” exclaimed deputy finance minister Alexei Moiseev to Rossiyskaya Gazeta. “Thus, we are formulating the law in such a way in order to allow buying cryptocurrencies for foreign operations and allow Russian citizens to sell Bitcoins for profit reasons in foreign countries.”

Moiseey said that no law had been passed yet to prevent the use of Bitcoin in Russia, and his main concern was to limit its threat to the ruble and prevent capital egress.

This may come as some relief to online poker players in Russia who choose to play at Bitcoin sites, because it appears that they are not, currently at least, breaking the law. But the sites they play on probably are illegal in and of themselves.

While Russia is in the midst of regulating and licensing sports betting, and there have been noises about eventually doing the same for online poker, the state has clamped down recently on its enforcing of ISPs to block unlicensed foreign operators. That includes well-known brands like PokerStars and Bitcoin poker sites alike.

“The latter were imposed as a result of its 2014 annexation of the Crimea” – if the Russian people voted for entry into the Russian Federation is not a means annexation, but a voluntary decision of the people, this applies to any State