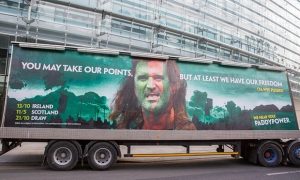 The ex-United tough guy has never been one to keep quiet when he feels aggrieved and following a PR stunt involving Keane’s likeness he decided to take action in court.

Unhappy with the way Paddy Power used his image to advertise their latest betting offers, Keane has since filed a case with the High Court in Dublin via his legal team, A&L Goodbody.

At the centre of the dispute is a billboard Paddy Power parked outside of the Republic of Ireland’s soccer stadium in June.

Sitting close to the venue, the poster picked up on the recent Scottish independence referendum and was designed to promote Paddy Power’s betting odds for the match between the Republic of Ireland and Scotland.

Taking Keane’s face and superimposing it on the body of William Wallace as depicted in the movie Braveheart, the poster then mocked the Scottish supporters by using one of the film’s most famous lines to suggest they were weak.

“You may take our points but at least we have our freedom (ya wee pussies),” read the sign.

Aside from potentially causing offense to an entire nation with its pictorial parody, Paddy Power also caused offense to Keane who is now seeking damages for the way his face was used in the ad.

Addressing the news, a spokesperson for Paddy Power gave a typically facetious response and explained that it’s now in the hands of the company’s lawyers, but they hope Keane will see the funny side of things.

“It’s with the lawyers so obviously we can’t talk about it, but hopefully they won’t take our freedom to have a bit of craic,” said the spokesperson.

This isn’t the first time Paddy Power has crossed the line with one of its promotional stunts. When Barack Obama first took up his position in the White House the operator offered odds on how long it would take before he was assassinated.

In fact, it’s not just Paddy Power that has resorted to using controversy in order to stir up some attention. Back in May, 2015, Oddschecker’s Australian outfit poked fun at the girlfriend of Manchester United striker, James Wilson.

Insinuating that Wilson should have a more attractive girlfriend now that he’s a professional footballer, the operator tweeted the following before removing it:

“Sure she’s a lovely girl but someone needs to remind Jamie Wilson he’s a pro footballer. Start abusing this privilege,” read the now deleted tweeted.

After public outcry, Oddschecker Au apologized for the incident, but so far the same can’t be said for Paddy Power.

Opting to stick with its tried and tested method of riding a wave of controversy, Paddy Power now looks set to meet Mr. Keane in court.