Roger Federer took down Marin Cilic in the finals of the Australian Open, capturing his 20th Grand Slam title. 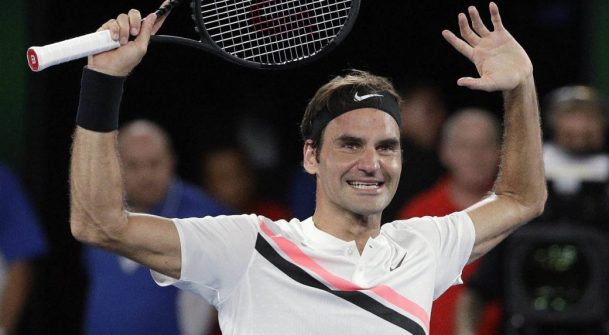 Federer dominated the fifth set of the match to outlast Cilic 6-2, 6-7 (7-5), 6-3, 3-6, 6-1. At the start of the fifth set, Federer appeared to be fading. But he would save two break points in his first service game, then immediately break Cilic’s serve in order to take command of the match.

The victory was a historic performance for Federer no matter how you look at it. Not only did it add one more championship to his record number of Grand Slam titles, but it also marked his sixth Australian Open win, tying Roy Emerson and Novak Djokovic for the most at the tournament.

By winning at the age of 36 years and 173 days, Federer also became the second-oldest man ever to win a Grand Slam, trailing only Ken Rosewall, who won the 1972 Australian Open at age 37.

Even that record may not be safe from the resurgent Federer, who has now won three Grand Slams in the last 12 months, including two consecutive Australian Opens. That run of excellence comes after many fans and pundits thought his run at the top of tennis was done: previous to last year’s Australian Open, Federer’s last Grand Slam victory came at Wimbledon in 2012.

The significance of the moment was not lost on Federer, who wanted to share his victory with the fans during the on-court ceremonies following the final.

“I’m happy I can show emotions and share it with the people,” Federer said in a speech that saw him struggling to hold back tears. “If I got emotional, it’s because it was a full crowd again. This is for them also.”

While there are no guarantees, particularly at his age, Federer will certainly have a chance to add to his tally later this year.

That’s unlikely to happen at the next Grand Slam, the French Open, where Federer has only won one career title. Last season, Federer skipped the French in order to rest up for the remainder of the tennis season. It’s unclear what his intentions are this year, but bookmakers appear skeptical of his chances. Bet365 has Federer listed at 16/1 odds, far behind favorite Rafael Nada, who is a 4/5 favorite to capture his 11th French Open title.

A healthy Federer would head into the grass courts of Wimbledon, however, as a favorite. He already has eight titles in London, and is currently listed at 9/4 to win there this year. Andy Murray and Djokovic are close behind, however, each being offered at 9/2 odds to win the tournament.

Federer wasn’t the only historic winner at this year’s Australian Open. Caroline Wozniacki won the women’s final 7-6 (7-2), 3-6, 6-4 over Simona Halep, capturing not only her first Grand Slam title, but also the world number one ranking.

“I dreamt of this moment so many years,” Wozniacki said. “To be here now, it’s a dream come true.”

Roger is the best of all time. He is just great. The way he plays like he is not human. There some shots difficult for anyone but not for Federer. Nadal is great too and thats how bet365 has him favourite but shouldn’t put that odds to Roger 16/1. If Federer get into that tournament in a good shape he will be favourite too.

Bravo for Roger, years are not obstacles, young players have to learn how to fight, I think that Novak will soon approach the leading troika, this is the year of tennis I think.