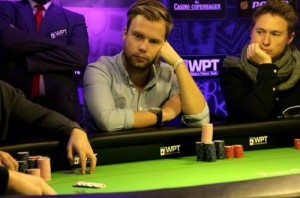 Robin Ylitalo battled for eight hours at the final table and, after he was done, he was £560,980 richer and champion of the EPT’s London Main Event. Ylitalo beat out Georgios Karakousis heads-up for the win.

Played at the Grand Connaught Rooms, the day started with Jeff Rossiter in the chip lead with 5.025 million, followed by Karakousis at 4.39 million and then the eventual winner, Ylitalo, with 2.795 million in chips. Other players at the final table included Stefan Vagner, Leo McClean, Jan Sjavik, Ludovic Geilich and Kully Sidhu.

It was Vagner who got off to the hot start, winning a huge pot on the first hand from Rossiter and then winning another big pot from Karakousis on the second hand. That heater was very short lived as he doubled up Geilich when his K-Q was beaten by Q-4. Karakousis nailed the first elimination of the day, beating out Sidhu when Karakousis hit a jack to pair his J-10 versus the improved A-Q.

Eliminations followed when Sjavik moved all in and Geilich made a call. Sjavik showed pocket sevens, which were dominated by Geilich’s pocket nines, which spiked a set on the flop and eventually held up for the win.  After that, one of the bigger stacks took a huge misstep. Ylitalo squeezed against Geilich and Vagner and in response, Vagner shoved all-in.  Ylitalo insta-called to expose A-K versus Vagner’s Q-J. An Ace spiked the turn and Vagner exited in sixth place.

Surprisingly, it was the start-of-day chip leader Rossiter that was eliminated next in fifth place by Karakousis, with Geilich being eliminated next for fourth place at the hands of Ylitalo.

McClean hung on to a short stack for a majority of the day and found himself with 2.2 million in chips against Karakousis (3.965 million) and Ylitalo (12.215 million).  McClean did battle and was able to double up against Ylitalo. Many hands later he four-bet shoved against Karakousis with A-Q and was called by pocket nines for a race. Unfortunately for McClean, he didn’t improve and finished in third place for a very respectable £249,850 price.

When the match was heads up, Ylitalo held a beefy four million chip lead against Karakousis. In the final hand, Ylitalo raised to 240k, and Karakousis responded with a three-bet to 640k. After a 1.5 million four-bet from Ylitalo, Karakousis shoved all in and was called. Ylitalo flipped over A-K suited and had Karakousis’ A-6 dominated. The board ran 2-5-5-8-J, making Robin Ylitalo the EPT London champion and £560,980 richer. For his second place efforts, Karakousis took home a £349,200 consolation prize.

The Main Event of the EPT London wraps up the series, with the tournament scene heading to the World Series of Poker Europe in Cannes, France.