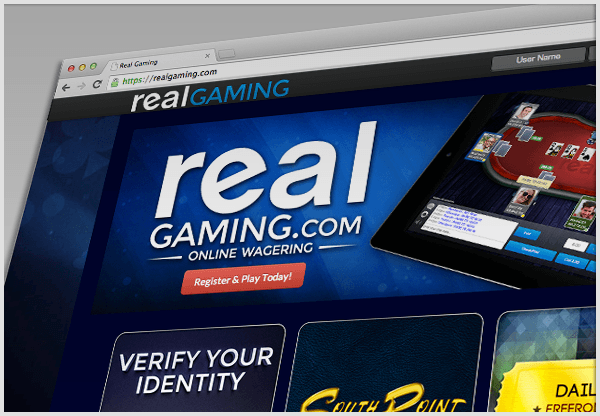 Real Gaming finally gets real, but can it make a mark on the Nevada online poker landscape? (Image: pokerupdate.com)

Real Gaming is hoping to vacuum up recent Nevada departee Ultimate Poker’s customers with a bold promotional gambit. The online poker site, launched by the South Point Hotel, Casino and Spa, which only recently left soft-testing phase after eight months under the cosh from Nevada regulators, is offering to match the balances of Ultimate Poker’s former customers up to $3,000.

The site got the green light from the state’s Gaming Control Board and Gaming Commission last month and subsequently vowed to step up its marketing efforts in order to reach a wider audience. Its initial marketing push, it said, had been focused on its existing land-based casino customers, and during the soft-launch period it failed to make any significant mark on the market in terms of traffic.

However, following Ultimate Poker’s withdrawal from the Nevada market earlier this month, citing a “difficult and uncertain path to profitability,” Real Gaming has spied an opportunity.

“Real Gaming is extending a special invitation to new players with the ‘Ultimate Match’ promotion, which will match balances up to $3,000 for players who held an account with Ultimate Poker,” states the press release. “New Real Gaming account holders must simply provide their old balance by presenting an Ultimate Poker account screen shot or a copy of a withdrawal check, and Real Gaming will match the same dollar amount once deposited, up to $3,000.”

There is, of course, a catch, and as with most online poker bonuses there is a play-through requirement. In this case, players will receive $10 for every $50 they accumulate in rake; which means it is essentially a 20 percent temporary rake-back deal; not quite as exciting as it first sounded. And while we’re sure anyone who had a substantial balance on Ultimate Poker would be wise to take the offer up, it remains to be seen whether it will be enough to instigate a sudden migration to Real Gaming, when WSOP.com is where the liquidity currently is.

Real Gaming previously existed as SouthPointPoker.com, which in 2011 became the first free-to-play poker site launched by a land-based casino in America. It was the first operator in Nevada to receive a remote gambling license, and so many believed it would be first into the market. Delays may have been due to the fact that, unlike its competitors, Real Gaming developed proprietary in-house software, which may have meant it experienced more glitches and required more thorough regulatory testing than its competitors’ platforms. Uniquely, it also requires its users to download a smartphone app that verifies their location and sends them a “token” enabling them to play

“While online poker is still new in regulated environments and faces some challenges, we remain dedicated to delivering innovative products and are confident in the success of online poker in the Nevada market,” said Lawrence Vaughan, co-founder of Real Gaming. “We welcome Ultimate Poker’s players and invite all to experience the latest gaming technologies and user-friendly mobile platform at Real Gaming that sets us apart from our competitors.”