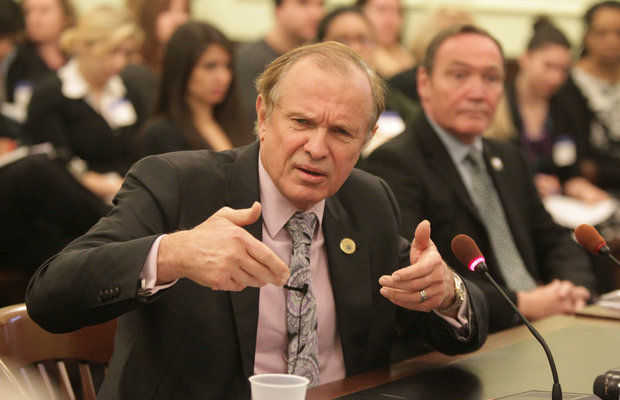 State Senator Ray Lesniak wants to be the next New Jersey governor, and could be a major online poker ally for the Garden State. (Image: star-ledger.com)

Word that New Jersey State Senator Raymond Lesniak will not be seeking a new term in the state legislature because he plans to run for governor in the Garden State in 2017 may be music to PokerStars’ ears.

Lesniak is a long-time proponent of online poker in the state, and a man who understands the importance of PokerStars’ involvement in the market, as well as player pool sharing for the long-term health of health of New Jersey’s successful Internet poker industry.

Lesniak has been a leading critic of Governor Chris Christie, since his administration’s controversial backdoor settlement with Exxon Mobil that exonerated it from environmental pollution in the state. Christie, of course, is now eyeing bigger things with a GOP presidential bid, along with 16 other contenders.

Regardless, Christie could not vie for this office again, as his two-term limit is up come 2017. He could theoretically then run again for the following election if he doesn’t make the GOP White House cut, based on New Jersey’s term- limit laws.

Lesniak, meanwhile, has accused Christie of stalling on the PokerStars issue. Responding to a question on Twitter towards the end of last year about why the online poker giant’s entrance to the market had been delayed he said, “Won’t move without Christie OK … Let’s not hope waiting for Christie is like waiting for Godot.” [a reference to a well-known Samuel Beckett play].

Lesniak has also used the social media platform to declare that “@PokerStars launch will spark an AC revival. Stay tuned for a major announcement…” and hinted that, following PokerStars’ appearance in New Jersey, interstate and international pool-sharing will not be far behind.

As well as championing the PokerStars cause, Lesniak has been a vocal critic of the Restoration of America’s Wire Act. He is also one of the main architects to the recent repeated push to legalize, or at least decriminalize, sports betting in New Jersey.

So what are Lesniak’s actual chances of getting elected? Well, not bad, according to New Jersey’s political observers, who believe that his support of a broad range of issues has the ability to unite disparate sections of voters.

“Animal rights groups, environmental groups, and others,” Rider University political science professor Ben Dworkin told New Jersey public radio station WBGO. “I think if he is able to sort of pull those actual voters as opposed to political organizations based in other counties, he could be a significant player and have a real chance.”

“He’s got those important party networks perhaps not in his pocket, but he has good relations with those parties,” added Montclair State University political science professor Brigid Harrison. “He’s been around for very long time so in a state where it’s very difficult to garner statewide name recognition I think Lesniak has a bit more than some of the other contenders.”

“I believe my record shows that I can get things done,” explained Lesniak. “The state certainly needs to get things done, and that’s why I’m looking at running for governor.”