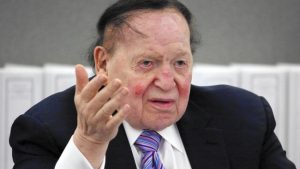 RAWA-like language has been withdrawn from a recent spending bill taking yet another move away from Sheldon Adelson. (Image: John Locher / Associated Press)

The Restoration of America’s Wire Act (RAWA) has been dealt another potentially fatal blow after anti-online poker was withdrawn at a House hearing.

In mid-May it came to the attention of the Poker Players Alliance (PPA) that RAWA-type language had been inserted into a spending bill scheduled to be heard by the House Appropriations Committee on May 25.

Although the amendment didn’t directly reference RAWA, the anti-online poker message was enough of a clue as to its origins for anyone in the know.

Couple that with the fact that it was added by Rep. Charlie Dent (R-PA) to the bill at the request of Sen. Lindsey Graham (R-SC) and it was clear to many that it was an attempt to progress the efforts of anti-online poker advocates without an open vote.

Fortunately, thanks to the work of the PPA and various pro-online poker lobbyists on Capitol Hill, Dent saw the approaching iceberg and decided to alter his course at the last minute and withdraw the amendment.

Although Dent’s home state of Pennsylvania is on the cusp of iGaming regulation, the PPA’s VP of Player Relations Rich Muny was quick to point out that Sheldon Adelson’s Sands Bethlehem is in Dent’s district.

With this being the case it should come as little surprise, according to Muny, that Dent has pledged to “try this again” in a future House hearing.

Fortunately, as the annals of time have shown us, any attempts to stir up support for RAWA are almost futile at this point.

Despite the Adelson-backed bill enjoying a brief moment of notoriety, multiple beatings on multiple political platforms have left the anti-online poker legislation on life-support.

Of course, the threat of RAWA is still one that players, operators, and lobbyists across the US have to take seriously, but the latest public beating is yet another sign that its threat is gradually fading.

In fact, while RAWA’s chances of success are receding faster than Adelson’s hairline, support for iGaming regulation is mounting.

Although Pennsylvania wasn’t able to agree on a bill that would have regulated online gaming in a recent House vote, industry insiders are confident that a revote in the coming weeks will get the job done.

If this proves to the case then that will take the number of US states allowing online poker to four. This could then act a catalyst for other states currently contemplating regulation, such as New York and California, to sign on the dotted line.