D-Day for RAWA as Poker Players Alliance Fights Back 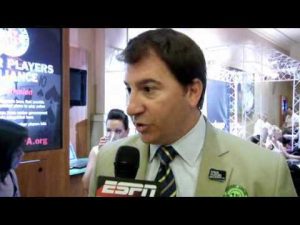 PPA Executive Director John Pappas has submitted his own unofficial testimony to the RAWA hearing coming before a Congressional subcommitee today (Image: espn.com/youtube).

This is it: today’s the day RAWA comes in front of the House Subcommittee on Crime, Terrorism, Homeland Security, and Investigations to discuss whether or not the Restoration of America’s Wire Act should be adopted or dismissed.

And the Poker Players Alliance (PPA) is doing its part to fight back, just in the nick of time.

The non-profit PPA, which is dedicated to lobbying on behalf of the online poker industry in the US and fighting for the rights of American poker players, will be holding a series of technical briefings today on Capitol Hill to coincide with the Congressional Hearing. While the opposition to RAWA remains strong in Washington, the PPA remains concerned that the witness list at today’s hearing is largely biased against online gaming.

The organization has invited politicians and the political media to a series of seminars that will offer insight into online poker technology and its ability to create a safe playing environment. There will be real-time demonstrations of age verification tools and geolocation technology, with Caesars Interactive and Geocomply on hand to show just how accurately player locations can be established.

The PPA received a stroke of luck when the hearing, which had been scheduled for March 26, was brought forward a day and will now take place just hours after the PPA’s demo.

This is the second fortuitous date change for the RAWA hearing, which was originally due to be held on March 6. In the interim an extra name has been added to the list of witnesses, perhaps as a result of the backlash against the perceived bias in the original roster of names.

Andrew Moylan, executive director of libertarian think tank R Street, will now be joining the hearing and will be arguing for states’ rights.

Meanwhile, John Pappas, executive director of the PPA, has published his own unofficial testimony, on behalf of the organization, which has been submitted to the hearing.

“As a player organization, the Poker Players Alliance takes consumer protections very seriously. Given the unjustifiable position of Internet gaming prohibitionist and supporters of H.R. 707 [RAWA]; I would argue that states like Nevada, New Jersey and Delaware have created a far more reasonable and effective approach to consumer protections than those who would simply stick their heads in the sand,” he writes.

“While the U.S. market is just under two years old, it is notable that in the three states [Nevada, New Jersey, and Delaware] that offer online poker and casino games, the states have not had a single reported incident of underage access,” he continues.

“If enacted,” he concludes, “RAWA would take a law aimed at stopping criminals, and turn it into a law that would criminalize states. Congress should soundly reject it.”

After today, we’ll know better whether his words resonated with the subcommittee or not.