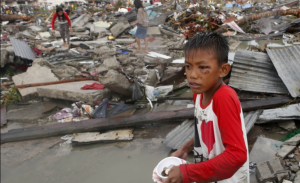 PokerStars and Full Tilt players could use dummy tournaments to help send aid to the devastated Philippines following a typhoon. (Image: Getty)

The poker community is known for its generosity, and PokerStars has been one of the leaders in the industry when it comes to raising funds for various charities and disaster relief.

The latest effort from Rational Group kicked off in November 2013 after Typhoon Haiyan hit the Philippines and affected more than 16 million people on the islands. PokerStars and Full Tilt took note of the devastation and decided to begin raising money. The donations were finally tallied and given to CARE International for relief efforts in the Asia-Pacific region.

When PokerStars and Full Tilt Poker began the campaign to raise money for Typhoon Haiyan relief, players were invited to play donate. They could play dummy tournaments, which were established to allow players to buy-in to a non-existent tournament with all of the money going to the donation pool. Players were also given the chance to transfer funds from their online poker accounts to the relief effort or donate directly through the CARE International website.

PokerStars’ Helping Hands charity program led the way and worked with CARE to ensure that all donations would go to help with food, shelter, food, and drinking water for those suffering in the Philippines.

The breakdown of the help provided by the funds was revealed by PokerStars. A total of 253,115 people received food, and another 3,700 received cash to purchase food at local markets. A total of 1,115 metric tons of food was delivered. Emergency shelter supplies were delivered to 59,984 people, and shelter repair kits went out to 57,451 people. More cash for those who lost their livelihoods, as well as specialized training for new jobs, was provided to 19,549 people.

It all started in 2004, when PokerStars ran a special tournament to raise funds for those in need after the tsunami off the Indian Ocean. Players donated $187,769, and PokerStars matched it and added extra money to donate a full $400K to the International Federation of the Red Cross.

The next summer, Hurricane Katrina devastated the southern United States and created a dangerous situation for many residents there. PokerStars hosted tournaments that resulted in $56,536 in raised funds, which was matched my PokerStars for double that amount that was donated to the American Red Cross.

In 2007, PokerStars hosted a tournament to raise money for the Hokie Spirit Memorial Fund for counseling and memorials for the 33 people killed at the Virginia Tech shooting in the US. A total of $11,285 was donated.

Former Team PokerStars Pro Gavin Griffin donated to the Avon Foundation for breast cancer research after his April 2007 EPT Monte Carlo Grand Final victory, and PokerStars donated, as did other players for a total of $27,870 for Avon.

Other charities and foundations that have benefited from PokerStars over the past decade include NOOW for those suffering in Darfur, Life Ball for the fight against AIDS, Red Cross for China earthquake relief, amFAR for AIDS research, and Pretoma for the protection of Costa Rica’s shark population. Even more charities have benefited from PokerStars’ consistent attention to the needs of the world and where the company can contribute.