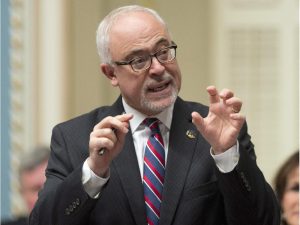 Quebec Finance Minister Carlos Leitao hopes that the blocking of unlicensed sites will increase revenue for Loto-Quebec by $13.5 million next year. But some are questioning the legalities of such a move. (Image: Jacques Boissinot /Canadian Press)

The Quebec government is planning to force Internet service providers (ISPs) to block access to unlicensed online poker and gambling websites in order to protect the revenues of its province-run Loto-Quebec corporation.

A budget plan presented recently would allow Loto-Quebec, which operates online poker and casino games under the Espace-jeux brand, to draw up a list of websites that providers would be required to block. The government believes the move will increase revenue for Loto-Quebec by $13.5 million in 2016-2017 and $27 million in subsequent years.

Quebec said the “illegal website filtering measure” is also aimed at improving public health because “illegal websites do not apply the same responsible gaming rules as Espace-jeux. They thus pose a risk to the population, especially young people.”

However, University of Ottawa Internet law professor Michael Geist believes the new laws are “possibly illegal” and may be challenged in court, because telecommunications regulations are usually the domain of federal government. And while gambling on illegal websites may be against the law, he said, simply viewing those websites is not.

“To legislate blocking for commercial gain sets a dangerous Canadian precedent,” Geist wrote on his blog. “Once blocking gaming and gambling sites is established, it is easy to envision the government requiring blocking of sites that are alleged to infringe copyright or blocking e-commerce sites that are not bilingual or do not pay provincial taxes.”

Bram Abramson, chief legal and regulatory officer for independent ISP TekSavvy Solutions Inc., told Toronto’s The Globe and Mail he feels the government should think “very, very carefully” before making such a move.

“ISPs are intermediaries and we do what we do best when we act a little bit like utilities,” he said. “We provide access to the Internet. We should not be put in a position of picking and choosing what people have access to.”

Loto-Québec’s online gaming arm has been taking in significantly less revenue than had been hoped, in part, according to Quebec’s finance minister Carlos Leitao, because of opposition from the grey market operators.

A recent study suggested that two-thirds of Quebecers are unaware that Espace-jeux is the official licensed gaming site of the province.

“Unlicensed sites obviously don’t have to follow those same guidelines so they have a huge competitive advantage,” said Leitao. “What we’re saying is, ‘If you want to play the game, everybody has to follow the same rules.’”

Will Amaya, headquartered in Montreal and a supplier of software for Espace-jeux, be given a pass? (Image: gamingslots.com)

Montreal is, of course, home to the headquarters of Amaya Gaming, which owns PokerStars and provides some technology for Espace-jeux. It will be interesting to see, then, whether there will be any concessions for the company if the government is permitted to move ahead with its plan.

Quebec has, in the past, considered the idea of relinquishing its monopoly to a small degree by opening up the licensed market to select private operators. Chances are that PokerStars will be high up on that list.

Is there a proper licensing routine in Quebec? Or in Canada for that matter. Or have they just allowed an unfettered market to exist, and flourish there?