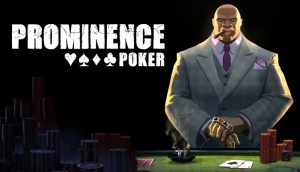 The free-play game was developed by 505 Games and quickly captured the attention of virtual gamers thanks to its multiplayer capabilities and in-depth options.

Topping the Steam gaming network’s Early Access New Release back in June, the game has since been refined and officially went live on August 17.

To ensure the game play was as realistic as possible, 505 Games drafted Pescatori to advise the developers on how players and opponents should be able to react in various settings. The main premise of the game is that players are required to make their way through the underground poker world.

A Storyline with a Strategy Twist

In order to follow this storyline and build a reputation, Prominence Poker players must take part in tournaments against real opponents. Something that’s helped to make the early version of Prominence Poker a hit is its bluff-and-tell system.

Under the guidance of Pescatori, 505 Games has created an intricate system that allows players to read subtle tells, such as speed of play and the way an opponent checks their cards, and make better decisions.

This level of authenticity has been lacking from many poker games in the past. But thanks to Pescatori, Prominence Poker is almost as realistic as online version of the game.

While this is great from a gamer’s perspective, the fact console games are now incorporating subtle poker strategies is great for our own industry. For the last few years there has been a distinct effort on the part of poker operators to promote their products to gamers.

Gamers Seeing the Benefits of Poker

A game like Prominence Poker fits nicely into this movement as it not only raises the profile of poker among serious gamers, but gives them an insight into the strategic elements of the game.

Of course, players moving from gaming to poker is nothing new (Bertrand Grospellier is just one example), but in the last few years it’s certainly become more pronounced.

Between poker streams sitting alongside gaming streams on Twitch and recent releases like Prominence Poker, gaming and poker are now becoming more intertwined and that’s great for both industries.

By using Pescatori to create a more in-depth console game, 505 Games could unwittingly be helping the poker industry to grow which is something we should all be happy about.

I played this game for a handful of hours this weekend, it’s not deep, nor fun… 6 man tournaments open with 3 or 4 people pushing all in calls on the first hand everytime, every single time. Also the frequency of straights and flushes are too high, so high in fact people now push all in with low hold cards off suit. flop drops 678 you know someone is holding 9/5 off suit or 5/4 off suit. So yeah this games a mess

I have played over 500hrs in this game. Not just a handfull.
I think you just had a bet set of tables. Not every tanle has players who go all in all the time.

Very good game would recomend to anyone.