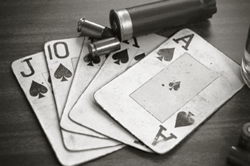 Prison Sentences Handed Down by French Court for Poker Cheaters

Three men have been sentenced to do time in prison in relation to a poker cheating scandal in Cannes, France. Dating back to 2011, the French court handed down the sentences to the guilty parties and also publicly revealed how the trio cheated in a scam that purportedly had never been seen before in Europe.

The sentencing carried out against Stefano Ampollini for actions taken at the Les Princes casino in Cannes during a session back in August 2011. Ampollini, Gianfranco Tirrito and Rocco Grassanno convinced two employees of the casino to insert a marked deck into a Stud game. The deck had invisible ink applied to the backs and using special infrared contact lenses purchased from China, were able to know all face-down cards and gain a significant advantage at the game. The contact lenses are freely available from a manufacturing company found in China at a cost of €2,000 a pair.

Ampollini was able to lift over €70,000 in the first game and came back two months later to take in another €21,000 using the same strategy. The casino had found his good fortune to be well outside of the boundaries of reality, however. Later in court, he testified that his scheme would have gone farther if it hadn’t been stopped by French authorities. Apparently, he had given the contacts to other friends and more visits were in the works.

According to the article, the French judge admitted he was impressed with the level of sophistication used during the scam. Judge Marc Joando did heave a heavy gavel, sentencing Ampollini to two years in prison and a €100,000 fine. Turrito received a three-year sentence and the same €100,000 fine for being the criminal mastermind behind the operation, while Grassanno received a two-and-a-half year prison sentence along with a €50,000 fine. There was no comment about the quality of the wine and brie served in French prisons.

Marc Concas, attorney for the ownership group that oversees the Les Princes casino, was quoted as saying that this technique was the first of its kind in Europe. Clearly, Concas lives in a shiny bubble, since it’s hardly conceivable that this technique has never been used there. A simple YouTube search for “invisible ink card cheat” revealed approximately 3,850 videos exposing just how to pull off this very scam.

This isn’t the first cheating scandal to go down at the Les Princes casino in Cannes. Back in 2010 during the Partouche Poker Tour, German pro Ali Tekintamgac was kicked out of the tournament for using fake tournament reporters as conspirators to find out opponents’ cards in hands.

In addition to that scandal, back in 2009 Jean-Paul Pasqualini and Cederic Rossi were known to be cheating at another Partouche Poker Tour tournament. It was alleged that the two were using hand signals to tip their hands to each other through the tournament, which they were able to leverage into finishing first and second.

In both cases, no criminal action was taken.