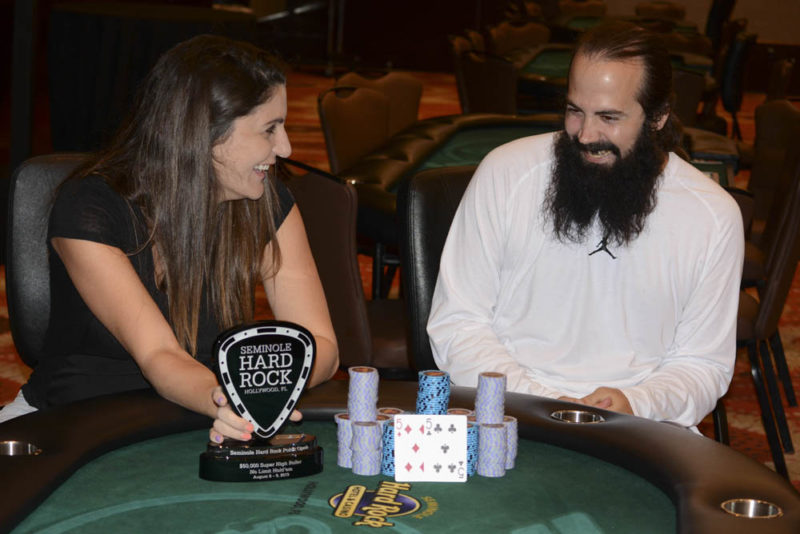 The American was once a leading light on the live tournament scene. However, after becoming a father for the first time in 2017, he’s taken a step back from the game.

Parting with long-term sponsor PokerStars in 2018, Mercier has used his previous success to focus on being a father. But as is often the case with world-class poker players, you can’t keep a good man down.

Looking to get back into the groove, Mercier anted for the at the Seminole Hard Rock Poker Open High Roller on August 8.

By his own admission, he’s played less than 50 hours of live poker this summer. However, when the final day dawned on August 9, the experienced pro held more than half the chips in play.

If that wasn’t enough of a confidence boost, Mercier had an intriguing omen on his side.

When he entered and won the $25,500 high roller at the 2017 Seminole Hard Rock Poker Open, his wife Natasha was seven months pregnant.

Fast-forward to this year’s $50,000 singe re-entry event and, you’ve guessed it, she was seven months pregnant. Happy coincidence or the work of a higher power, the dynamic worked.

As the final day wore on, Mercier controlled the action. One of the pivotal moments inside Florida’s Seminole Hard Rock Hotel & Casino occurred on the bubble.

Facing an all-in from Dan Shak on an A♠4♥2♣ flop, Mercier pondered his options before calling with A♥J♥. His opponent tabled pocket kings and quickly exited stage-left after blanks fell on the turn and river.

With the cards and chips going his way, the American was virtually unstoppable. Indeed, it took just 90 minutes to bring the final table to a close.

In the end, A♠J♠ was enough for Mercier to clinch the Seminole Hard Rock Poker Open High Roller title.

Although he was arguably the most successful tournament player in the finale, Mercier admitted good fortune was on his side.

“I had over half the chips in play when we were seven handed, so I was playing a ton of hands and just taking advantage of spots. But I also got dealt really good hands and was able to call all-ins when I was in the big blind and those hands won,” Mercier said after his win.

Where Mercier goes from here is unclear. With $19.5 million in career earnings and a second child on the way, another break is likely.

However, if his recent strategy is any indicator of how fatherhood suits the poker pro, his opponents better watch out.

Hope to see him play more regularly after taking an extended break. Still remember his big break in San Remo