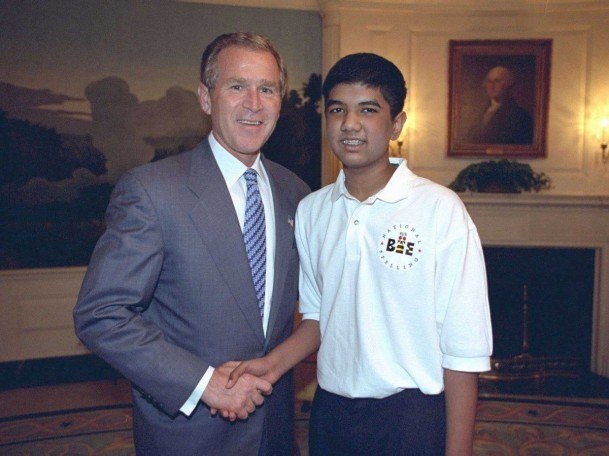 Friends in high places: Now a poker pro with an impressive $3.8 million in tournament winnings, Pratyush Buddiga won the national spelling bee finals when he was only 13. (Image: Reuters)

Pratyush Buddiga is unlikely to be fazed by the competitive pressure of the now up-and-running WSOP, or by the media circus that descends on the Rio for the next six weeks.

That’s because 26-year-old from Colorado fortified his nerves at a tender age on the spelling bee circuit, winning the Scripps National Spelling Bee as a 13-year-old, back in 2002.

It even means he’ll be used to the ESPN cameras, which also covered that prestigious event.

Buddiga, who revealed his past glories in an interview with the Washington Post earlier this week, successfully spelled the word “prospicience” under extreme pressure to take the national title.

The word, incidentally, means “the act of looking forward,” according to the Merriam-Webster dictionary.

But it’s so rarely used that not even Microsoft has heard of this word, apparently, and queries it on my screen with a wavy red underscore. Yet the young Buddiga nailed it with aplomb.

“People love it,” Buddiga told the Washington Post about his spelling bee past. “People love talking about it, love asking about it. They ask me to spell words. People find it interesting just because it’s a little bit of a different background than most poker players. It’s probably the question I get asked most about at the table.”

From Bee to Buzz

Since then, he has become a high-roller specialist, amassing over $3.8 million in live tournament earnings to date.

“The idea that helped me is that I could be the best at something if I worked hard at it,” he says. “That’s something the spelling bee has done for me throughout my life. No matter what I do I could look back and say, ‘Okay, I was the best in the country at something, I can do it again.’ Especially poker.”

But one thing that the 11-year-old Buddiga could never have imagined, he told the Post, was that one day he would be traveling the world making millions at the poker table, which suggests a complete lack of prospicience on his part.

Before They Were Poker Stars: Other Odd Prior Careers of Some of Poker’s Most Notable Kingpins

We delved into the lives of some other top poker talent and came up with these surprising discoveries.

A young Phil Hellmuth spent one summer holiday cleaning out the monkey cages at the Primate Center in Madison, Wisconsin. We know he can dodge bullets, but can he dodge monkey feces? Let’s hope so!

Somehow, Ziigmund managed to become the 2009 Finish Waterslide Champion, despite apparently existing on a diet of booze, kebabs and online poker. Will wonders never cease!