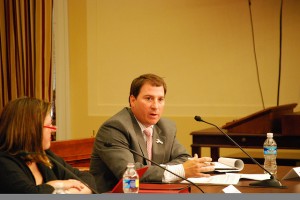 John Pappas, executive director of the Poker Players Alliance (PPA), has caused confusion by stating that his organization would oppose a federal bill that sought to ban online gambling, even if it made a dispensation for online poker.

Pappas was responding to rumors, rife at the recent G2E gambling expo in Las Vegas, that lawmakers were planning a push to implement such a bill during Congress’ forthcoming lame duck session.

Poker players took to the forums to voice bewilderment at the statement, which seemed to expressly contradict the PPA’s aims of 2012, when it put its weight behind Senate Majority Leader Harry Reid (D-Nevada), who was examining the possibility of a similar carve-out bill, in an effort that ultimately proved fruitless.

However, it seems that Pappas now believes that without the support online casino games offer to Internet gambling in general, online poker will struggle to take root in the America.

“We as a poker community need to recognize that the success of poker often is built on other forms of gaming,” Pappas told PokerNews.com. “If you cut off all other games in the US market, investment and interest would shrink considerably. We’re going to fight tooth and nail to protect the interests of poker players, but poker-only in the U.S. might not be a sustainable model to benefit players long term.”

Later speaking to NJ.com, Pappas attempted to clarify his position, although perhaps not completely successfully. “If there was a bill that banned online casino games but legalized online poker at the federal level, we would support that all day long,” he said.

But surely a federal bill that banned online casino games but introduced a carve-out for online poker would be legalizing poker on a federal level. It is after all, a federal bill.

It seems that Pappas is saying that he would only support such a bill if it introduced legalization, regulation and licensing on a federal level (perhaps with the option for some states to opt out if they wished), because then poker sites would be able to offer online across the US and would benefit from large nationwide player pools. However, a situation where regulation was left to individual states, as is now the case, but where online casino gaming would no longer be available to bolster revenues, would be unacceptable.

Whether this message was lost in the reporting, we’re not sure, but what is clear is that it’s the PPA’s intent to oppose the Restoration of America’s Wire Act to the bitter end and, despite mixed messages, it is here to fight for the interests of online poker players.

Whether or not there is any truth in the lame duck rumors (the phrase “lame duck,” incidentally, refers to the last session of Congress that occurs after the election when the incumbents may be on their way out), Pappas urged everyone in the gaming industry to keep a close watch during the session in November. However, a more direct threat to the future of online poker in America, he acknowledged, could be a Republican majority in the Senate next year, as is predicted, an eventuality that would undoubtedly enlarge Sheldon Adelson’s sphere of influence.