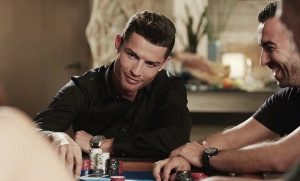 Cristiano Ronaldo may be sponsored by PokerStars but he will have to wait to play the game in his native Portugal. (Image: dailymail.co.uk)

Portugal’s online poker players will have to wait at least four months for regulated online poker, and likely much longer, thanks to an apparent mix-up in its newly drafted regulations.

The country’s online gambling reforms actually came into force at the end of June, opening up the previously monopolized market to foreign operators. While the lawmakers who drafted the legislation got a few things wrong, such as a punitive tax regime that has scared many operators away, at least it seemed the new market was eager to share its poker liquidity with other countries.

But in December 2015, the government announced that its impending online poker market would be segregated in line with the self-asphyxiating French model. The news came as a complete surprise, not least to the country’s former secretary of state for tourism, Adolfo Mesquita Nunes, who had been one of the authors of the legislation.

“[The open model] was the model approved by the government of which I was part,” he said in bewilderment. “This was the model that I left prepared as a government member, and these were the instructions I left.”

Following calls for poker players to boycott the market, in April this year lawmakers flip-flopped again. They would after all be adopting an open model and permitting the sharing of player pools with countries, they said, provided those countries do not prohibit liquidity sharing.

But someone had blundered. Representatives of SRIJ, the Portuguese gambling regulator, told the player advocacy group ANaon that lawmakers had neglected to create a B2B licensing system within the regulatory framework.

Networks rely on B2B licenses so that their skins can be licensed to operate on their platforms, but only a regulatory framework for consumer licenses had been created. The upshot is that this will preclude liquidity sharing networks from participation in the market, at least until someone gets around to passing new law, which would take two years, explained the regulator.

Grasping at reasons to be cheerful, Portugal’s poker players consoled themselves with the fact that at least PokerStars, which has applied for a license, would be able to join the market under these circumstances. And as the operator with the greatest liquidity in the world, things might just work out OK.

But this week the regulator told ANaon that the regulations relating to Portugal’s liquidity sharing plans had not even been sent to the European Commission for approval yet. Once they get around to that, there will a wait of three to four months, while the proposals are inspected by the EU and its member states.

At this rate, by the time Portugal actually gets a regulated online poker market, allowing its players boost the liquidity of the international player pool, the robots will well and truly have taken over.

I thought that the country of Portugal was one of the best places to go play poker online as they had so many restrictions and problems with tax law online game, I was amazed with this bad news for players in Portugal will have to keep waiting for those four months