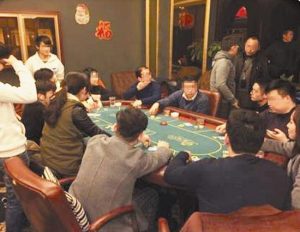 Illegal Chinese gambling den: a poker club in China has been used as the front for an unlawful casino operation worth more than $45 million in just the first half of 2015 alone. (Image: sina.com.cn)

An illegal Chinese gambling den operating under the guise of a poker club has been exposed by police in the Hubei Province.

According to police reports, the illegal gambling hub was officially recognized as a poker club that targeted well-educated gamblers, but investigations revealed that it offered an array of illegal casino games.

After detaining 140 gamblers and casino employees, as well as 21 members of the gang in charge of the illegal business, police officers were able to ascertain that it had made more than 300 million Yuan ($45 million) in the first half of 2015 alone.

However, despite the privileged backgrounds of many patrons, the club was the center of a major illicit operation that police are now trying to unravel.

As it stands, gambling in mainland China is illegal, and the only jurisdiction in the country that’s able to offer casino games is Macau. However, there are some regions on the mainland that are able to offer games of skill, if which poker is one.

This dynamic has allowed a number of organizations, including the APPT, to offer legal poker tournaments within the country. However, this set-up is not without its problems, as PokerStars found out to its cost in 2015.

Despite having the green light to host an APPT event in Nanjing back in April, PokerStars was forced to bring a temporary halt to proceedings after police officers entered the venue and proclaimed that the tournament must be shut down.

The issue was eventually resolved and PokerStars wasn’t hit with any fines. But the incident did highlight the conflicting nature of China’s feelings towards poker.

Although many regions see poker as a game of skill, the feelings of some government officials or high ranking police officers can seemingly change on a dime with no notice.

Essentially, because of this dynamic, poker clubs in certain parts of China have been able to operate without attracting much attention from the authorities in recent years.

However, all that could now change after the police raid in the Hubei Province found that poker clubs could be used as a front for illegal casinos.

This case will now be investigated further and this could last for many months, according to local sources.