No question about it: Poland’s Sebastian Malec is special. On the surface, he’s a scruffy millennial fond of a yellow hoodie and wide-framed glasses, but beneath the veneer is an ambitious young man with the heart of a champion. 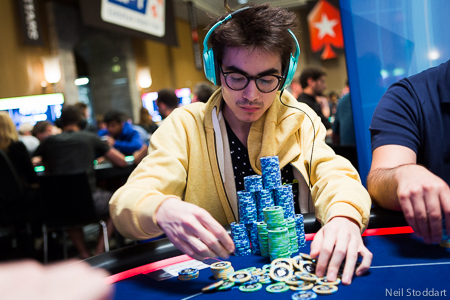 Sebastian Malec just turned 21, but has been playing in EU events since he turned 18 to become a young master of the game. (Image: PokerStars)

A decade ago, winning a major poker tournament was a sure way to permeate the larger consciousness and establish oneself as either a superstar or decided character of the game.

That’s no longer the case, as today there are simply too many poker tournaments for everyone to follow all of them. For poker fans to take note now, it takes the right person exhibiting a special combination of great luck and table antics.

In August, those circumstances came together in the European Poker Tour (EPT) Barcelona Main Event, a tournament that attracted 1,785 players, created a $9.8 million prize pool, and awarded a $1,271,041 first-place prize. One of those players was the earnest 21-year-old Malec, a student and aspiring poker pro who qualified for the tournament via a €27 ($30) satellite on PokerStars.

After six days, the former competitive chess player bested Germany’s Uri Reichenstein in heads-up play to capture the prestigious title, but what he did and how he acted during the match was really what captured the imagination of the poker world. 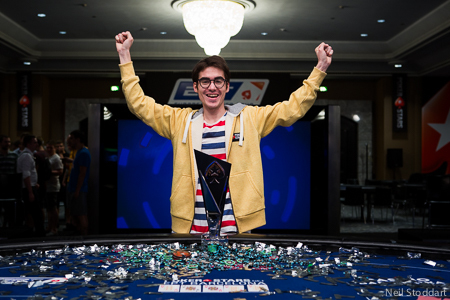 Sebastian Malec says his million-dollar win will take some pressure off, but won’t substantially change his lifestyle. (Image: PokerStars)

He was loose, talkative, and oh yes: he drank. A lot. He needed to use the bathroom frequently, and of course, there was the immortal moment when he walked away from the table during the final hand to take a selfie on the rail. Words don’t do his performance justice, but the video on YouTube certainly does.

Love him or hate him, there’s no denying that Malec made an impression on the poker world. As such, we at CardsChat wanted to learn a little more about this quirky Polish wunderkind.

A Perfect Mind for Poker

Malec was born to a Polish father and Kalmykian mother. Where’s Kalmykia, you ask? A Jeopardy question if ever there was one. It’s a Russian republic, simultaneously known for having a majority of Buddhist citizens, and for being one of the world’s premier chess hubs.

His parents met while attending a university in Moscow, and ultimately produced Malec in between two brothers, who are 23 and 10 years old now. In May 2014, Malec graduated from an International Baccalaureate program at a Warsaw high school in Poland, and immediately applied to all the great British universities with the goal of pursuing mathematics and statistics.

He interviewed at Oxford, and had offers from Imperial College London, Warwick, University College London, and Edinburgh. Ultimately, Malec settled on Warwick and began classes that October.

“It was a really cool place, but I didn’t meet anybody there,” said the young gun. “I guess I was a bit antisocial and there weren’t any opportunities to interact with people in lecture, so I kept going to London pretty much all the time to see my friends. I was playing online poker all the time in my room.”

If that sounds like two contradictory directions, you are beginning to understand this complex guy. And because he played chess competitively as a child, Malec found he was already suited for poker, which he first discovered in 2010 when his chess coach travelled to the World Series of Poker (WSOP).

“Long hours sitting, playing tournaments, being competitive, and working hard,” Malec said when asked about the overlaps between the two games. “Being passionate and genuinely loving the game. Being disappointed and upset with yourself. Crying too, I guess, but that’s rare. Strategy and analytical thinking. A lot of people who play chess, play poker, too.”

After a few small cashes in low buy-in tournaments, Malec played his first major in the 2015 EPT Barcelona Main Event, where he finished 76th out of 1,694 players for $17,757. After misses in the EPT Malta and Dublin Main Events, Malec set his sights on the Netherlands, though not to play poker. Instead, he decided to move there to study art and culture.

“I dropped out of university in May 2015 and played poker for over a year, one could say full-time,” Malec explained. “I just started my first year at the University of Maastricht doing Arts and Culture courses. I want to take specialization in ‘Media Culture’ and also do a Masters in that. In the future, I want to be a writer and specifically write screenplays.”

That begs the question, does winning life-changing money also change his plans?

“I’m planning to continue my studies, but from the combined time that I will devote to studying and playing poker, it will probably be more like 70/30 in a favor of poker,” said Malec, who admittedly had less than half his own action in the EPT Barcelona Main Event. “The course I’m doing and the university are both really chill, so I don’t need to spend that much time on them. I have three-day weekends.”

Drinking It All Up

Malec didn’t finish off Reichenstein until 1 am, and with the winner’s presentation, photo ops, and interviews, the young prodigy didn’t have much time to celebrate his whirlwind victory.

“I went outside the casino with my friends to smoke a cigarette and have some fun with the trophy. Somebody handed me a beer on the way. We had a laugh, took a bunch of pictures in different arrangements, and then I had to go back inside to go the payout desk and figure out how I want my prize. 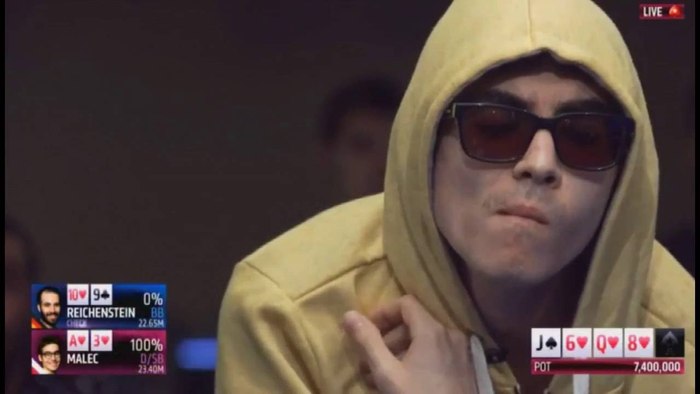 Did Malec’s wiggly moves throw his opponent off his game on the final hand? Or did he really just have one too many bottles of water? He won with the nut heart flush. (Image: PokerStars)

“The last thing I had to do was a sit-down interview with the TV guys. Finally, after two weeks of playing poker every day, after six days of the Main Event, we sat in a big group right next to the casino. I ordered twenty Jack and Cokes and we were there just drinking, talking, and of course, there were some cards on the table and my friends played some different games.”

In the middle of the low-key festivities, Malec seized the moment to address his peers. In the center of the room, he got up on a chair and delivered a speech.

“I talked about how this win of mine was a team effort of the whole Polish crew present in Barcelona, which was a lot of people, and how I stole everybody’s luck during this tournament [laughs]. I named all the MVPs and it was a really good atmosphere, everybody was happy. After the bar closed, we went to the casino to eat pizza and then said goodbye and went to the hotel.”

As for the reaction of his family and friends back home, the congratulations, not surprisingly, rolled in.

“They were really happy for me obviously,” said Malec. “My mum of course was worried, but that’s just how mums are. My dad is happy that I can enjoy my studies and won’t have to spend that much of my time trying to grind out profit playing online. 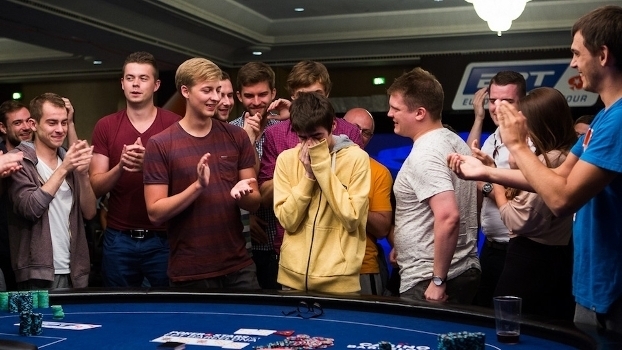 Sebastian Malec wasn’t afraid to put his emotions on his sleeve after winning this momentous tournament. (Image: PokerStars)

“I’ve got a lot of great responses and messages from friends who were touched because I cried after I won. One friend wrote to me that I showed them that dreams and goals are possible. It was amazing, really. My brother wished for his birthday that I would win this, so it was the first time in his life that a birthday wish came true!”

As for the approximately $500,000 in prize money that Malec received after paying out his investors, he doesn’t have too many plans, other than to buy a new phone, a camera, computer, and to furnish his new apartment in Maastricht in Holland. Of course, he’ll play a little more poker, though he doesn’t plan to take too big of shots. Instead, he’ll stick to primarily $1,000 buy-in tournaments and lower.

Top of the Poles

Malec is just the latest player from Poland to find poker success. There are old school players, like Mikolaj Zawadzki and Pawel Brzeski, and other young guns like Dominik Panka, Remi Wyrzykiewicz, and Dzmitry Urbanovich, just to name a few.

“I would say that Polish players in general are very smart, creative, and hard-working people that have a very good theoretical and intuitive grasp and understanding of the game,” Malec responded when asked about the Polish poker prowess.

“The other thing that you mentioned is the community. It’s a very open one, everybody is welcomed. Last year, I didn’t know anybody, and now I’m friends and good buddies with the best Polish poker players, who by implication are also the best poker players in the world. Travelling around Europe to all different festivals with the guys and talking poker with them is, I would say, the best learning curve that is available at the moment.”

Malec proceeded to recite a laundry list of Polish poker players who have influenced him, and while there were too many to mention here, he summed it up nicely.

“All of those people are amazing players and amazing people. The beautiful thing is almost all the people that I named, and there are a lot of them that I didn’t, are much better players than me!”

Interestingly, Malec will also go down in history as the last winner of the EPT Barcelona, as at the same stop, PokerStars announced its decision to consolidate tours. That means no more EPTs. Instead, both the PokerStars Championship and PokerStars Festival events will continue on.

“I was a bit sad at first, because I only started playing EPTs in 2014. My first Main Event cash was last year in Barcelona. I always thought the tour would be there for me.

“Since I won, I changed my mind a bit. Because I won in this unique fashion, my win will have a place in EPT history and I’m really happy about that. Now, I’m excited for future events and destinations, although tax-wise, I prefer the tournaments in the EU. I think it’s an interesting choice from Pokerstars and maybe a good one.”

Malec, who celebrated his 21st birthday this August, also plans to travel to the United States, but not for the reasons you might imagine.

“Next summer, I’m going to the States for at least two months, but not for poker,” he said. “Since my school year lasts until the end of June, I will probably start my trip in Vegas and play the WSOP Main Event. Then, maybe some tournaments in Florida, and that will most likely be it. I want to visit Vegas, Florida, the East Coast, and the West Coast, minimum. I’m really excited for that. I’ve never been to the States and I’m fascinated by the culture.”